1MDB debt about to be wiped out, says Arul Kanda

The investment fund’s president and group executive director Arul Kanda Kandasamy disclosed this today, after he explained that the government had decided to use debt for 1MDB projects.

“This means a certain discipline is required as interest must be paid and assets well managed.

“At the same time, government funds can be better used for other purposes,” Arul Kanda told reporters present at a press conference held at the Royale Chulan Hotel here, today.

He said 1MDB placed a bid for IPP (Independent Power Producers) because it could use the consolidation to lower rates charged for electricity supply to Tenaga Nasional Bhd (TNB).

A one per cent reduction resulted in RM2.9 billion savings for TNB and also the rakyat, he explained. 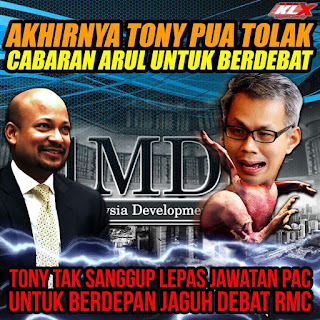 It is not factual to say that 1MDB does not have problems, it does…

(1) It has got debts and that needed management and rationalization

(4) It has got a conspiracy against it which wanted to see it fail as a means to discrediting and embarrassing the government and so management would have to spend a substantial amount of time and energy dealing with this conspiracy rather than focussing on the work at hand.

What it doesn’t have are these….

(1) Criminal culpability. So far all allegations against 1MDB are based on a series of stolen emails which are purportedly tampered. Even then all it provided are spurious links and no documentary proofs of wrongdoing were ever presented.

(2) Integrity issues with regard to its objectives and mission goals. 1MDB was set up with the noble intentions of providing affordable long term electricity supply with price stability. It was not set up for the benefits of cronies as was the case under Malaysia’s 4th PM. In fact it was set up for the exact opposite reasons ie to put an end to the system of cronyism which has plagued Malaysia’s infrastructure developments under previous administration and its sole objective was to serve its ultimate shareholders, the Rakyat.

(3) Management Issues. Since Arul Kanda came on board, a rationalization plan has been put in place and accepted by the government. In fact 1MDB has become arguably the most transparent institution in Malaysia’s corporate and GLC history. All that it needed is time to execute its rationalization plans and that should be completed within the next couple of months.

In conclusion yes 1MDB has problems that needed sorting out but it’s nowhere near the magnitude of what the opposition, particularly Tony Chicken, Clare Brown and what’s his name would like us to believe.

So, if anybody wants to debate about 1MDB, what are your terms of reference? Do not keep shifting the goalposts and bring in issues totally unrelated to 1MBD. In fact is there anything even worth debating about that doesn’t plague any other normal company?