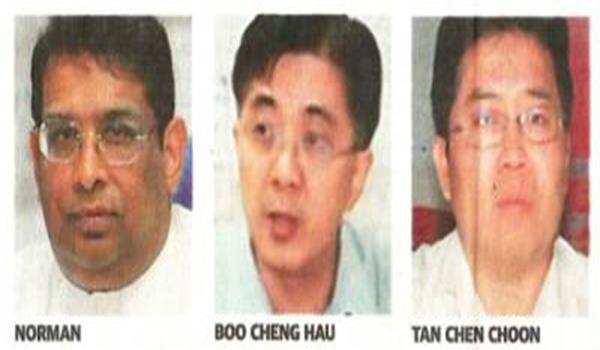 Election is still yet to come, and the hope of becoming the government is still far, even naming candidates for Pakatan Rakyat is already chaotic, or to be more exact, failed.

If in Perlis we saw how PAS and PKR are going against one another, the same thing goes to PAS and DAP in Kedah, and now, in Johor where we witness how DAP and DAP as well as PKR are tied in a fight.

The internal issue in their own party and coalition can no longer remain hidden, until Anwar himself had to admit in his own ceramah in Melaka yesterday that there were a little ‘misunderstanding’ and it can be resolved.

Because of that small ‘misunderstanding’, today 3 DAP leaders have confirmed their resignation because they are not happy with the actions taken by the father and son, Lim Kit Siang and Lim Guan Eng who intervened in the matters of the party in Johor. Those who resign are DAP Johor Chairman, Dr. Boo Chen Hau, his Deputy, Norman Fernandez and Secretary, Tan Chen Choon.

Clearly, the ‘misunderstanding’ is not a small matter as described by Anwar, instead, it is a serious.

Just imagine, those who resigned were high-ranked leaders of the state’s DAP. Thus, it is not surprising when another 5 is rumored to have planned to do the same thing, they include ADUN Mengkibol, Ng Lam Hua.

Dr. Boo Chen Hau is known to have fought hard to defend DAP that he got to a furious battle with Datuk Chua Jui Meng. however, after having the confidence to win, DAP rejected Dr. Boo to make way for those who are ‘chosen’ by Lim’s family. Until Dr. Boo’s resignation, he still did not get the confirmation whether he will contest or not.

From there, DAP’s internal issues spread to PKR when PKR candidates have to succumb to contesting at risky areas. Few of PKR leaders who became the victim of this issue include Chua Jui Meng where he was ‘kicked out’ to Segamat, away from his comfort zone. Gelang Patah, just to make way for Lim Kit Siang Temple.

Before this, Chua did ask for an option between Bakri or Kulai Parliament when he cannot contest in Gelang Patah. However, Chua’s request was rejected just like.

Besides that, we also saw how the clash for seats in Johor Jaya where both DAP and PKR announced their own candidates, Liow Cai Tung and Jimmy Phua. As for now, there is still yet to be any decisions made on the matter.

It is said that a few DAP leaders will resign soon. The expected number is 8 leaders, including those who have been listed as candidates, because they were given areas which they do not favor.

Meanwhile, in a program last week, DAP members expressed their dissatisfaction over top leadership’s actions in listing outsiders as candidates.

PKR is also said to have began to boycott all DAP programs and only provide their cooperation in PAS programs.

From the scenario above, what we can conclude here is that Lim Kit Siang really is a dictator and DAP do not respect Anwar Ibrahim as future PR Prime Minister.

Anwar could not defend his party as well as his candidates, Anwar is unable to control the situation and he is not an effective leader. DAP in the other hand, is proven to be a chauvinist and kiasu party who do not respect anyone, even their own leader.

This also show how PR can never get to a mutual understanding.

Thus, rakyat can now see how impossible would it be for PR to manage the country if they are to rule Malaysia, they cannot even manage their election work.