After All The Trees Are Gone, What Would Azizan Do? 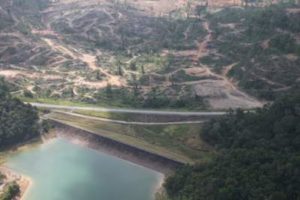 There is nothing anyone can do but to sigh looking at how PAS Kedah government destroys their own state.

That is why, it is not surprising why many are suspecting that PAS KEdah are not hoping for more mandate to rule Kedah for more than a single term.

Perhaps that is why within four years of their ruling, PAS Kedah had taken whatever they can get to collect all the ‘gold’ for themselves and their cronies.

Forests are cleared due to extreme logging which proves that PAS never really look forward, they only look at the present time, their single term rule. For PAS, things that would happen after their term would not matter because by then, their leaders and cronies are already rich.

Perhaps, at least that is what the excos and officers in the state administration office and companies owned by Kedah State Government thinks.

However, Kedah Chief Minister, Dato’ Seri Azizan Razak might think differently. That is why, still shows his interest to compete and win the next election to hold his position. Being famous for being a clueless Chief Minister, Azizan still fail to realize that his state is going under.

Up until today, Azizan still believes KUIN’s Rector who said that KUIN is under control and KUIN does not have any huge issue. Azizan also believes in Sanusi, his Secretary, saying that logging activity in Kedah can be justified and all the criticizm are merely political game from their enemies. And Azizan also believe that Phahrolrazi will get to force Penang to pay for the water supply charge which was announced in Kedah Budget the a while back.

Azizan even believes in the President of Kulim Hi-Tech Park, Sobri, who says that he could bring in extra foreign investments to the Tech park without any support from the Chief Minister. The same thing goes to Bina Darul Aman which could implement their project with success as well as transparent. For Azizan, all the loss from the project in Papua New Guinea, Langkawi, Aquaculture and all state government projects are only small issues and they would not affect his administration.

Only depending on reports from his ‘men’. Azizan kept on believing the things he chooses to believe that he never observe any of the issues himself.

Azizan do not realize that if he still holds his position for the next term, Kedah would have nothing to offer.

Azizan also do not know that after all of his excos, officers and their cronies are rich, Azizan will be blamed over their crime. By then, Azizan should take the responsibility for not taking any actions to stop the chaos.

People of Kedah should open their eyes and look at what is happening in their state. The only thing which PAS Kedah could think of in terms of generating income is extreme logging. If Azizan still leads Kedah by next term, what would he do?

It is time for people of Kedah to learn the importance of choosing the right party to rule their state.

Today, we witness how all forests are destroyed. Tomorrow, after everything’s gone, it is not impossible that the state government would end up selling lands to the Chinese, including those from Singapore, like what has been happening in Kelantan.