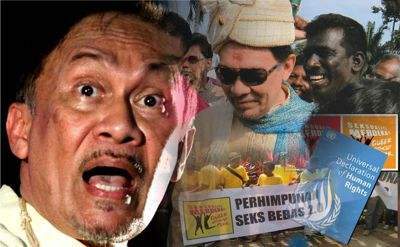 ANWAR IS WORRIED…SO PLAYS THE SABAH ISSUE TO PSYCHO SABAHANS Anwar Ibrahim prides himself for bringing in Umno have-beens who do not have any followings into his party and for this, he went all out to celebrate and brag, showing his normal arrogance, as if the BN has lost leaders with strong followings.

Anwar is very popular on this ‘buying or pinching’ people as he treats everyone like goods that can be bought – to him everyone has a price and given the right price, everyone will be his goods – toys that he can play around with.

So now he has Sabah politicians who are in reality defunct – spent force and those who know they would not be fielded again – who are looking for platforms to continue doing political work as they do not know what else to do.

Sabah politics have always been parochial until Umno expanded its wing there and unite the Malays and bumiputras but same time Umno and BN do not alienate other political parties that champion the cause of the people of Sabah.

Those who left were the ones who cared for themselves rather than the people – Sabahans – whom they claimed they were championing for but in reality making themselves wealthier while the people still struggle for their daily lives.

And these are the people that left and joined Anwar – birds of same feathers flock together – and with that Anwar went around boasting he has Sabahans in his hands.

To him this is a threat to BN’s hold on Sabah, the so-called fixed deposit, where majority Sabahans have traditionally supported BN, have strong confidence in BN bringing development and prosperity to them.

These are facts that Anwar dare not deny, that is why his line of campaign and propaganda is to give equal rights of administration and to build a bridge from Labuan to Sabah…a dream like in an American movies or is it Indian movie?

In reality, PKR is losing steam…support for the party has been eroding and PKR’s alliances DAP and PAS are no longer depending on PKR for anything, politically speaking.

DAP has its own Chinese support while PAS has its own Malay-Muslim support and they do not need PKR for anything.

PKR image is fast going down the drain just like Anwar’s own image among the Malay supporters as they see PKR leaders, particularly Anwar as liars who are good in making promises but never have the intention to fulfill them.

Selangor is a very example of how PKR leaders lied and cheated the voters and now Anwar shifts the focus to Sabah, trying to close the Selangor chapter which is a failure in every aspect of politics and administration.

Selangor, as far as Anwar, PKR and Pakatan Rakyat is concern is a gone case as they cannot make amends of whatever mistakes or lies they had done as voters keep queuing to sue them in courts.

They (PR) have lost hopes actually but in politics, which PKR is very good at, is create the perception that everything is good and put all the blame to BN.

This make believe perception, like American movies, no longer taken seriously by Malay voters are now more matured and wise, who see every aspect of politics behind the games being played.

So Anwar is worried…very worried.