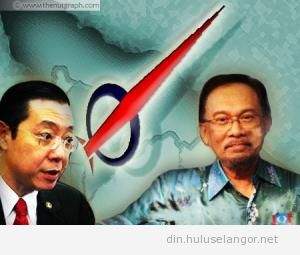 PKR and DAP a lot of similarities between them. That is why their relationship with PAS is a lot less.

Their understandings are a lot stronger in forms of objective, which is to turn Malaysia to a Republic, plural understanding, liberal, rejecting Islam as the official religion, rejecting Malay Kings and Bumiputera rights.

However, realizing that they may not be able to raise enough support from rakyat if they are to shout their real intention, they did it in discreet to somehow manipulate rakyat’s minds. This is done through BERSIH, Seksuality Merdeka, SUARAM, SUHAKAM, including inviting world’s famous lesbian, Irshad Manji to push our young minds to accept them.

With such similarities, PKR and DAP should be a single party. Besides, they both promoted themselves as parties for all races. And the fact that they practice nepotism and cronyism where almost all of the leaders are among their own family members.

Thus, if they are the same, why move on different components?

The answer would be it is because their leaders are power crazy where everyone wants to be the leader and no one wants to be number two. Even though DAP accepts Anwar as the Opposition Leader and the next Prime Minister, but everyone know that DAP has full power on Anwar because they hold a lot of his dark secrets.

Anwar in the other hand, has no problem to become DAP’s puppet just as long as on paper, his position stays as the number one man. For him, not merging with DAP would at least make him proud for being the true leader.

But the bigger issue than hierarchy would be Anwar and Lim’s family behavior where they love dictatorship.

Anwar is a leader who is not democratic. That is why he would manipulate votes in party election to ensure that only his people would stay at higher positions. Even though PKR has a President, his own wife, but that is just an illusion. Every decision in the party is on Anwar’s hand without even considering others’ opinions. That is why one by one of his friends starts to leave him after realizing that they are just his tools.

Lim Guan Eng’s dictatorship behaviour in the other hand has been known by all. His behavior had caused him trouble every single time. The sPICE case for example, had opened up his characteristics wide open for the public to see.

But, just like Anwar, Guan Eng is just too arrogant to admit his mistakes and repair it. They often mock all the criticism that the more they are criticized, the more they show their evil side.

That is why Guan Eng did not hesitate in bringing down kampungs and Malay and Indians’ businesses just because they think that those people do not support them. But Chinese business has never been harassed even though they run their business at illegal spaces.

All of those were revealed by Tunku Aziz, when he announced that he wanted out from DAP. For him, Guan Eng is the opposite of his father where he does not operate in integrity. Instead, he does things emotionally and his ego.

Perhaps Tunku Aziz has been around Kit Siang for too long or that he was too straight to be able to see that father. Like father, like son. Who else would have influenced Guan Eng to be disrespectful if not Kit Siang? This Lim family live like kings where they see others as their slaves, and other races are dogs that they can be kicked or put to sleep if they displease this family.

Hence, with two dictators in a pact, how can we expect good cooperation from these two leaders? Instead, with these two, it would only bring double destruction.

Like what we are seeing today, their arrogance had caused them a lot and that they have caused a lot of loss for their parties and themselves.

So, if these two lead simultaneously, mistakes might double up and that would be really bad for the country.