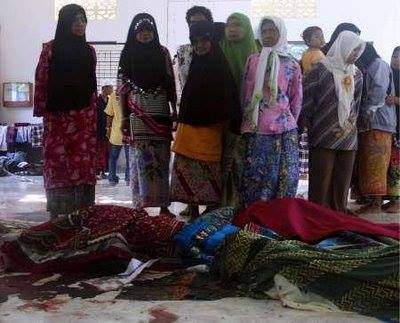 Stories from Thailand mentioned that Anwar would begin his ceramah in Pattani from July 4 to 7. The reason for his visit there is to gain votes from those who have dual-citizenship, along with the help from a few opposition politicians, religious individuals and Muslim NGOs from South of Thailand.

He is now getting closer to Dr. Ismail Lutfi from Wahabbi tribe in Thailand and Tuan Guru Nik Dir Waba.

Anwar would also invest in Muslim cooperatives here and is planning to present an economic paper for the program which is hosted by Ibnu Affan cooperative which is owned by the Wahabbi.

If the story is true, Anwar’s visit to Thailand should be seen in a wider scope than just to see it in Malaysian angle. This is not just the matter on how many votes he would gain to help Pakatan Rakyat in Kelantan or Kedah. But, we cannot take this matter lightly because Anwar could just trigger another chaos and violence. With the situation in South Thailand being in the brink of clash, along with its low income population, it would not be hard for Anwar to recruit groups who would trigger such chaos with a little money.

As for the long term effects, we should see on the dangers in mindset which will be spread by Anwar to Muslims there. Before things get worse, they should know that everything that is touched by Anwar would eventually be destroyed.

As soon as Anwar set his foot in UMNO, the destruction among youth in UMNO began to happen when he introduced them to political finance and rebutting one another. We are lucky enough with the fact that UMNO higher leaders were among those who are wise and they managed to save the party from being destroyed by Anwar. But in the end, those youth, those who have no moral nor ethics, slowly followed Anwar Ibrahim by leaving UMNO.

When Anwar was the Education Minister, he brought confusion by spreading extreme ideas which did not benefit anyone. And when he was the Finance Minister, he almost put the country into bankruptcy. Just imagine how it would be if he turns into the next Prime Minister.

That is why we are worried over the future of our brothers in Thailand if they are ‘touched’ by Anwar.

When such fanaticism began to spread among the residents there, Anwar would slowly insert his liberal messages. And slowly, he would form a liberal group in the middle of the Islamic group in Thailand. With constant funds from the West, the group would spread liberal ideas and they would weaken Muslims at the area through clashes. Even the money which is invested into the cooperatives might just be money from his neo-con friends from the West.

Destroying Malaysia is enough, do not let him destroy our brothers who are already suffering in Thailand. The damage of one country could spread to its neighbouring countries. And this is exactly what the West wants.

Thus, for the sake of Islam and brotherhood, Muslims in Thailand should be given early warning so that they would know the dangers which Anwar holds are a lot heavier than bomb explosions and gun shots which they had to go through everyday. This is because, Anwar is bringing the enemy of Islam’s agenda through emotions and it would spread until the time where Muslims would begin to destroy one another