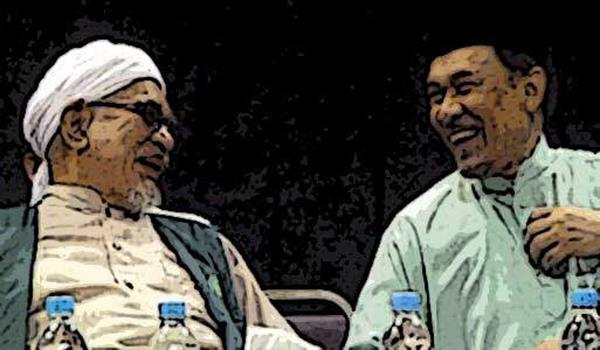 For PAS at present, losing former deputy president Nasharuddin Mat Isa is nothing compared to losing partners DAP and PKR because both the parties could deliver them the Chinese and Indian votes.

PAS is confident of retaining the members and supporters vote when the party made a U-turn on the issue of using the word Allah…not actually knowing the grassroots and die-hards fundamentalist members are getting more frustrated.

The party leaders especially NIk Aziz Niki Mat playing to the gallery of Lim Guan Eng and Karpal Singh on the issue as well other issues that anger the hard core members who do not trust the two parties and their leaders.


Despite them (PAS hard core members) being loyal and follow whatever decisions taken, they are not as dumb as they look to be…they are smart now and know what is right and what is wrong.

Their distrust towards Anwar Ibrahim and DAP leaders began after 2009 when they saw Anwar’s move from outside to take control of the party that saw many leaders aligned to the fundamentalists were voted out and replaced by Anwar’s liberals.

Mohamad Sabu or Mat Sabu, a rebel rouser who is Anwar’s stooge was voted in, defeating intellectual and fundamentalist Nasharuddin, paving the way for Anwar to begin his control in PAS.

Whatever councils PAS have right now are under Anwar’s influence directly and indirectly, after having his men in the supreme council since 2009…the day PAS lost its defence without knowing it.


Since then, internally the fundamentalists have been trying to sustain their hold on the party but the heavy presence of liberals aligned to Anwar is too much which saw president Abdul Hadi Awang giving in slowly to the pressure.

And Nasharuddin’s expulsion was one of many Anwar’s strategy to destablise PAS and make it weaker so that PKR can stand out better in the opposition pact.

What is happening in PAS now is exactly what Anwar wants…internal friction that will make the Islamic party weak and lose direction…become liberal and pluralistic.

Anwar now controls the party right up to the Syura council given the decision to expel Nasharuddin is ‘out of the blues’ as majority of the members of the council are fundamentalists who do not even trust Anwar.


Although the decision came as a surprise to many, even to Nasharuddin, the political world in the country knows Anwar has won in gaining control of PAS.

It is now up to PAS members, who are die-hard fundamentalists to bring back the party to its original objective before it becomes a real platform for Anwar to ‘cleanse himself’.