Are you sure this is about 1MDB? 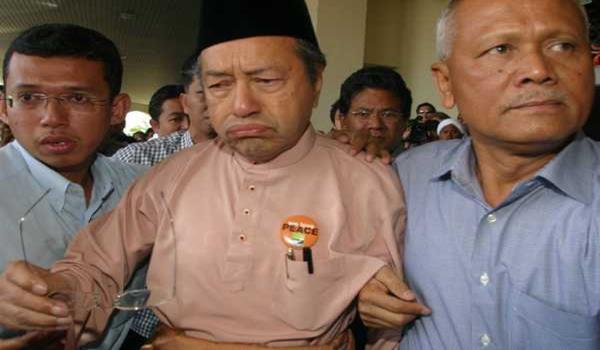 After being involved, directly and indirectly, in politics over the last 40 years or so since the 1970s (longer than some of you have been alive), and after having participated in quite a number of internal power struggles, political intrigues, and conspiracies since the 1980s, I can vouch for one thing. And that one thing is politics is never what you think you see.

To understand politics better, I have enrolled in a few courses conducted by Oxford (short three months courses) regarding politics and power play over the last 500 years. And one thing I have learned through these courses is things are never what you thought they were.

For example, the perception we have is that the Church of England exists today because the hangsap English King, Henry VIII, wanted to divorce his wife and marry his mistress but the church in Rome did not allow for divorce. Actually that is not quite true. That may have been the secondary reason. The primary reason, though, was money.

The church came under Rome and the church owned 20% of the land in England. The farmers who worked the land were serfs (meaning slaves) and the church taxed the farmers heavily (worse than the 20% VAT we now pay) and the church sent large sums of money to Rome (there was no Zeti or Bank Negara to control money being sent overseas). So England was ‘bleeding’.

Before Henry VIII ascended the throne in 1509 (around the time the Portuguese came to Malaya), England had been at war with France for 100 years since the mid-1300s. England, therefore, was bankrupt because of this long war. The church, however, was rich. So Henry ‘nationalised’ the church (which used to be ‘internationalised’) by breaking from Rome. He then rampas all the church property and overnight England became the richest country in Europe.


And from then on England became a world power and colonised many other countries over a period of hundreds of years (Malaya was colonised 200 years after that). And if not because of that, today, Malaysians would be speaking Dutch and we would be having Dutch laws rather than English laws such as the Sedition Act (a law that Henry introduced).

So the reason Malaysia became British (we used to called British Malaya) was not because the King could not keep his pecker in his pants. It was all about money whereas the perception is it was because Rome forbade divorce. Hence when political moves are made, we need to know the behind-the-scenes happenings to be able to properly read the situation. In short, we need to look at the tapestry and not just focus on the brush strokes.

I can go on and on and give you dozens upon dozens of other examples and turn this article into a thesis (and maybe get a PhD for it). But I know many of you will not bother to read any article of more than 1,000 words (which is the problem with Malaysians: they are too lazy to read). Anyway, let me try to be brief and just mention in passing other incidences in history that have been misread.

For example, did you think the United States was not aware that the Japanese were on the way to bomb Pearl Harbour? How can you move that many ships across the sea without being seen? The fact was: Americans did not want the US to join WWII so the only way to change public opinion was to allow the Japanese to bomb Pearl Harbour (which made Americans angry enough to want to go to war). The Americans call that ‘collateral damage’. (Some conspirator theorists say this was also why the New York Twin Towers were brought down).

Was the conflict between Charles I and Parliament in the 1600s about democracy and because Charles had ‘suspended’ Parliament? That is what we believe. Actually it was because the Catholics had ‘infiltrated’ the palace and many of those in Parliament were Puritans and anti-Catholic. So it was really about religion and not about democracy.

A secondary reason was because Charles had increased taxes to finance England’s many wars and those most affected by this were the rich and the Lords — mainly those in Parliament because the Lords were…you guessed it…in the House of Lords. So democracy was not the real reason they chopped off the King’s head. It was due to religion and, yet again, about money.

If that is the real reason, and if that reason were true, then today I would be with Dr Mahathir like I was back in 2006 when he made his move to oust Tun Abdullah Ahmad Badawi (Pak Lah). My support for Dr Mahathir from 2006 to 2008 is no secret. Everyone knows that and many were very angry with me because of it (Azmin Ali and Anwar Ibrahim included).

I supported Dr Mahathir against Pak Lah because we were shown the ‘evidence’ of the Prime Minister’s crimes, wrongdoings and transgressions. And then Pak Lah was eventually ousted and replaced with Najib Tun Razak. However, was Pak Lah arrested and charged for all these crimes that we were told he had committed based on the evidence that we were shown?

After Pak Lah was ousted and Najib took over nothing happened. Was Pak Lah really guilty after all? Or was all this just bullshit to get our support to oust Pak Lah? If Pak Lah is really guilty and if the evidence we were shown regarding his guilt is legitimate then today he should be in jail together with Anwar Ibrahim.

All ten of us were told this and Saari Sungib even wrote a series of books about this in case you were not aware.

In my second ISA detention in 2008, the Special Branch told me I was wrong about the allegation that Najib was involved in the murder of Altantuya Shaariibuu. I was also wrong in the Statutory Declaration that I signed in June 2008 regarding Rosmah Mansor being present at the scene of the crime the night Altantuya was murdered.

The Special Branch then showed me the evidence to prove that I was wrong. The night Altantuya was murdered Rosmah was at a function in the Tabung Haji building and there were photographs to prove this. The car odometer reading (which is taken each time the car leaves and returns to the house) plus the guardhouse records (which shows the time the car leaves and enters the house) also proves it.


Today, the Special Branch (or rather the ex-Special Branch bosses) is saying that Najib is guilty after all. If they really have evidence to clear Najib of the allegation, which they showed me, why do they hide this evidence?

One ex-senior man of the Special Branch has challenged the ex-Attorney General to tell the truth regarding Najib. Okay, I now challenge these two to show Malaysians the evidence that they showed me. Did they lie to me in 2008 or are they lying to the nation today? They either lied in 2008 or they are lying today. Which is it?

These people told me that Pak Lah fell because the Special Branch supported Dr Mahathir back then. And now they claim to be a Dr Mahathir loyalist and anti-Najib. So is the issue really about 1MDB or is the real objective to help Dr Mahathir oust Najib?

It looks like this is all just one big power play. We have been used so many times in the past in this power play. We are told one thing and shown certain evidence to solicit our support and then we find out later that it is all just ‘udang sebalik batu’. So this time around I am not going to jump onto the bandwagon in the Gerakan anti-Najib euphoria.

I know I am not going to be popular for saying that. But then no one told me that this was a popularity contest so does it really matter? Time will tell as to what the issue really is if it is not really about 1MDB. And after 40 years I can confidently say that it is not about 1MDB but about who should be the tiger on the mountain and that two tigers are fighting it out for this privilege.