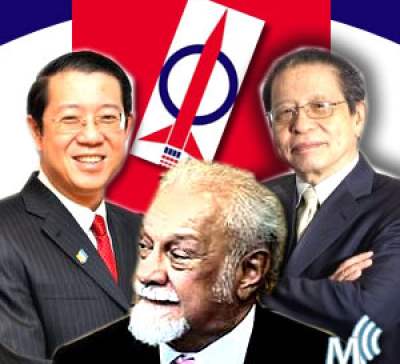 Burning Embers of Change in DAP

The Central Executive Committee results have left behind burning embers fanned by strong winds of change indicating internal forces at work to dislodge the Lim dynasty’s iron grip on DAP and bring about real change as espoused by their Ubah slogan.

The Iron Grip is Loosening

Regardless of whatever baloney pro-DAP media may spin, the heart of the matter is that that the delegates have sent a clear message to voice their discontent with Lim Kit Siang and Lim Guan Eng. Both of them had the BIGGEST drop in votes compared to the previous elections held in December 2012.

Lim Guan Eng tried to brush off the glaringly reduced number of votes that he received in the re-election today by a feeble proposition that it might be caused by a drop in the number of delegates who voted.

Last year during the CEC elections in Penang, there were 1,823 delegates present. This year, only 1,725 delegates voted. The reduction in attendance is only 5.3% whereas Lim Guan Eng’s drop in votes secured in 17.2%, more than three times HIGHER than the drop in attendance!

The fact that 1, 725 voters chose to vote this way instead of endorsing Lim Kit Siang and Lim Guan Eng via higher votes is indicative of DAP delegates rising to the clarion call that the Lim Dynasty must end.

The same pattern persisted for unpopular candidates who have been negatively perceived and this includes Nga Kor Ming, Tan Kok Wai, and Ngeh Soo Ham. Conversely, ALL the other 14 candidates, especially those who are overtly not in the Lim camp (with the exception of Zairil) received dramatic increase in votes. Liew Chin Tong received the highest votes (even more than Lim Kit Siang), Chow Kon Yeow (whom many feel should have been Penang CM but was deprived of that position despite seniority because Lim Guan Eng appointed himself as CM before anyone could say anything), Gobind Singh and Teresa Kok).

In terms of popular vote, it is crystal clear that both father and son have lost the popular vote of the candidates. Just as they lambasted Barisan Nasional for having lost the popular vote in GE 13 and should not rule, both father and son MUST STEP DOWN (in accordance to the same standard they set for BN) and let the new echelon of leadership take over. Failure to do likewise, despite the glaring message sent by 1, 725 voters, is akin to Lim Kit Siang and Lim Guan Eng hanging on for dear life to their party positions in Draconian fashion.

Rightfully, Liew Chin Tong and Zairil Khir Johari should be at the helm of leadership. Lim Kit Siang was Secretary-General of DAP from 1969 to 1999, which is THIRTY years in total. From 1999 till 2004, he was Chairman of the Party and is now Adviser. Having being in the party since 1966, Lim Kit Siang has been serving DAP for FORTY-SEVEN years and must step down now and let new blood take over.

Similarly, Lim Guan Eng has been Secretary-General since 2004 to the present – three terms and should step down.

Evidently, their cry for UBAH! UBAH! UBAH! has backfired on them for truly, DAP delegates want a change in leadership and if Lim Kit Siang and Lim Guan Eng do not step down, they are hypocrites shouting hollow slogans of UBAH – Change when they themselves cannot and will not change!

However, all that change remains a dream for after the CEC election, it’s status quo. The positions assigned do not reflect the type of votes/support each secured.

Labour Bureau: Headed by A. Sivanesan

Guan Eng is serving for his third term as secretary-general and it will be his last because the recently amended constitution bars anybody from holding the post for more than three terms. After this term, we can presume he expects to become party chairman. That be the case, Karpal will have to make way for him.

However, if you look at the results in the following diagram, we see the increasing popularity and rise of Liew Chin Tong, Zairil, Chow Kon Yeow, Gobind, and Teresa Kok. LGE should make way for new blood to be injected into DAP if he is true to his UBAH maxim. How could DAP afford to hold the meeting at One World Hotel? Why the extravagance splashing money this way and then begging people for funds for the Ubah Sarawak campaign? It is senseless. If someone sponsored, who? Why? Reveal if they are true to their CAT principle. This extravagance is akin to MCA holding elections at Mandarin Oriental Hotel instead of Wisma MCA and UMNO holding their elections in Palace of Golden Horses instead of PWTC. For one of the Gerakan AGMs, eight delegates were assigned to one room in a cheap hotel around KL and ate packed meals. Why condemn the government for spending when they themselves are not practicing what they preach?

If they are so confident in securing the same committee, there is no necessity to lure delegates with a venue that has glam and glitz. Even so, note the drop in attendance!

Malaysians, the awakening should have dawned on you! Wake up! DAP aka Daddy-Anak Party

have shown us their true colours and the delegates have spoken. However, are the DAP warlords listening?

Just as the DAP warlords IGNORED the voice of DAP delegates by reinforcing their own position, they will subtly ignore the needs and concerns of Malaysians to further their selfish motives and agenda.

Do not be fools to be hoodwinked by empty promises. It is a case of Talk Cock by the Tokong with nothing to show in substance. Dispose of the misconception that DAP is doing well in Penang. It is NOT. More negative changes are in store for Penang…time will show who is the chameleon masquerading as a people-centric government.

Those burning embers will implode DAP one day. For all our sakes, let us hope it will be soon!