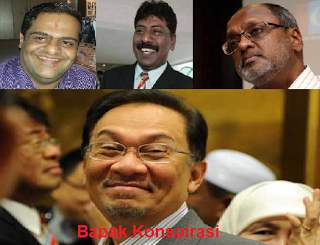 Deepak Jaikishan has again postponed his interview with MACC, second time in just a few days…despite his previous burning desire to tell all to MACC on his allegations about PM Najib and wife and what ever as being probabloy instructed by Anwar Ibrahim.

The only problem is Deepak, the carpet seller does not seem too keen to reveal to MACC despite his talks at press conferences or he just do not have the documentary evidences as he claimed.

Logically, if he has the docuements as he claimed and with the burningn desire as reflected in his interviews with the press, he woulod have run…not crawl…to MACC to proof to Malaysians he is not ‘playing politics or being made used of by Anwar and gang.’


But postponing the interview with MACC, which he himself made the appointment is something very mysterious, considering he claimed to have all the documents and proofs.

Talks have it that Deepak is being abandoned by Anwar and gang when he hit out at Rafizi Ramli because Ramli had taken ‘the limelight’ on the issue from him.

Now when MACC is willing to listen and investigate, the carpet seller stalled…giving excuses…something fishy is going on and wonder where the fish is.


So now the carpet seller is in deep trouble and it is not easy for him to wrangle his way out as Malaysians are waiting and his credibility is at stake…probably this is nothing to him but given what he had voiced out the past few weeks, he is actually not credible, just like PM Najib Tun Razak commented.

Deepak’s game, if it is a political game, affected Anwar and Pakatan as a whole and only thinking Malaysians know this, those who seek the truth on the matter, not the make-believe stories as told by Anwar and gang.


Thus, Anwar and gang are hard-pushed now to present evidences to all their allegations and claims…and in the meantime, all their games are being exposed one-by-one…as the saying goes…stark naked for people to see.

It is not easy now to influence people with just claims and allegations as voting Malaysians, even the young ones, are curious to the extent they want to see evidences…hard evidence…not just mere words.