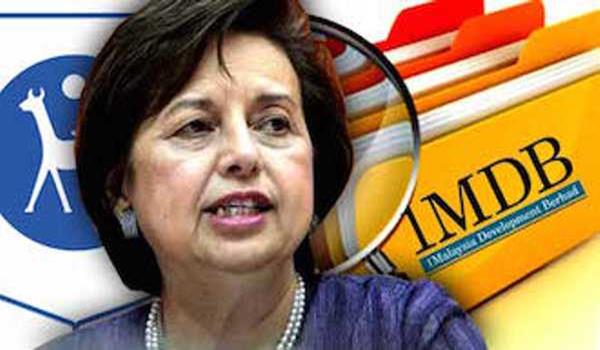 Did Zeti fire a killer shot against Najib? One even more important point to note is that all this happened in 2009-2011. What was BNM doing in 2009-2011 when 1MDB’s accounts declared all this and it was something that was already known back then and not something that was discovered only now? It appears like there are people who are trying to sabotage 1MDB’s rationalising and debt reduction program because if 1MDB succeeds in doing this then there will be no more ‘modal’ to use against the Prime Minister.

It appears that Bank Negara Malaysia (BNM) and/or its Governor, Zeti Akhtar Aziz, are not playing a kosher game and are merely playing politics. In June this year, when 1MDB obtained Cabinet approval for its rationalisation plan and repaid US$975 million of its loan, BNM announced it is launching an investigation into 1MDB.

BNM then said the Ringgit is weak because of 1MDB, which resulted in foreign investors losing confidence in Malaysia. Now that the Ringgit appears to be strengthening and 1MDB has just announced some good news regarding IPIC, instead of talking about that they distract everyone with this latest round of ‘bad news’.

Is this Zeti’s game plan — to get people to focus on the bad news rather than the good news?

Spurred by what some see as a rebuke by the Rulers, Zeti has fired what the anti-Najib forces regard as that much needed killer shot. But is it really a killer shot or merely another case of ‘I say, you say’? There are those who have interpreted it as the Rulers issued their statement to stun the prey while Zeti delivered that final shot to kill it before it regains its composure.

Well, let us see whether that is what is happening because we do not really have that long to wait for the much talked about vote of no confidence to be proposed in Parliament.

October 2015 has thus far been a very busy month for those who are trying to oust Prime Minister Najib Tun Razak. As I said in an earlier article, October has to be the month that Najib is brought down because if he survives this month then he is not going to celebrate Christmas in retirement, as they are hoping he would. And that would also mean he will remain Prime Minister all the way up to the next general election.

So it has to be now or never and they are firing all their ammo and are not holding their punches. The problem with killer shots, though, is that you cannot just wound your prey. You must make sure you bring down your prey because you do not get a second shot. So is this the final shot or are there more? From the looks of it this is the final bullet and there are no more ammo in the arsenal.

What this whole episode has shown is that at the end of the day it still all boils down to the game of perception. And politics, being all about perception, is the only game in town you can play. And those who talk the most and shout the loudest normally win the game of perception. If you keep quiet and do not respond then you lose because your silence would be deafening and it would give the impression that you are silent because you are guilty.

So now we see Tony Pua and Tun Dr Mahathir Mohamad and Rafidah Aziz and Kadir Jasin and so many other people coming out with statement after statement. The fact that they have so much to say can only mean one thing: they are telling the truth. Truth is based on who says the most and who says it loudest. What they say is not really as important as how they say it and how many are saying it.

This is called Propaganda Blitzkrieg. The way you play Propaganda Blitzkrieg is you keep hammering again and again the same point non-stop. You must be seen as the one talking the most and shouting the loudest. You do not give the other side time to respond. Even if they do respond you must drown their response with your blitzkrieg. And you must get as many people as possible to talk and flood the Internet, social media, mainstream media, etc., with comments to drown the ‘opposition’.

It is like in a demonstration. If I can get 100,000 people to rally while you get only 20,000 that means the people are with me and not with you. The fact that more than 10 million voters and not just 100,000 people decide the outcome of the elections does not really matter. I will win the election because I got a crowd of 100,000 against only 20,000 for you.

But is anyone really analysing what both sides are saying to see who is making sense? In the first place, are they talking about the same thing or about two different things? The problem is we are assessing this whole thing not based on the gist of the statements but on the strength of who is talking the most.

And herein lies the problem. We are hearing but not listening. Hearing and listening are two different things. Many hear but that does not mean they are listening. I can assure you that while many Muslims attend Friday prayers to hear the Imam’s sermons, very few actually listen to what the Imam says. Most who are physically present in the mosque are actually absent in mind.

The long and the short of it is 1MDB has been accused of money laundering and embezzlement. That is the allegation that has been raised by all and sundry, Dr Mahathir in particular. That, in fact, is also the reason why Matthias Chang and Khairuddin Abu Hassan went to various countries to lodge their reports. And that, too, is what they are saying the FBI is supposed to be investigating.

The statement from BNM, however, talks about inaccurate reporting or reports without complete disclosure of material information. The AGC, however, was investigating allegations of money laundering and embezzlement and they did not find any evidence of that alleged crime. And that is why the AGC did not pursue the matter — because 1MDB did not commit the crime of money laundering and embezzlement.

So we have a situation here where BNM is talking about one thing and the AGC is talking about another. This, however, appears to be missed by most people. Or did they really miss it or are they intentionally trying to confuse the whole issue?

1MDB explained that the whole issue centres around the matter of the US$1.83 billion that it had sent overseas back in 2009-2011 as equity and murabaha loan investments in a joint venture with PetroSaudi after getting BNM’s approval. 1MDB then explained that the use of those funds have been explained in detail in the notes to 1MDB’s publicly available financial statements dated 31st March 2009.

1MDB went on to explain that in September 2012 the US$1.83 billion was converted into fund units valued at US$2.318 billion. This US$2.318 billion was then redeemed in 2014 and 2015 and then utilised to reduce 1MDB’s debts. “The remaining US$940 million of fund units,” 1MDB explained, “are guaranteed by Aabar and have been ear-marked for a ‘debt for asset swap’ with its ‘AA’ rated parent, IPIC, as part of the 1MDB rationalisation plan.”

Tony Pua says that the money should be brought back to Malaysia. Dr Mahathir says 1MDB has too many debts and that these debts should be reduced. So who does 1MDB listen to, Tony Pua or Dr Mahathir? How do you do both at the same time when you can only do either one or the other: pay your debts or bring the money back?

One even more important point to note is that all this happened in 2009-2011. What was BNM doing in 2009-2011 when 1MDB’s accounts declared all this and it was something that was already known back then and not something that was discovered only now? It appears like there are people who are trying to sabotage 1MDB’s rationalising and debt reduction program because if 1MDB succeeds in doing this then there will be no more ‘modal’ to use against the Prime Minister.