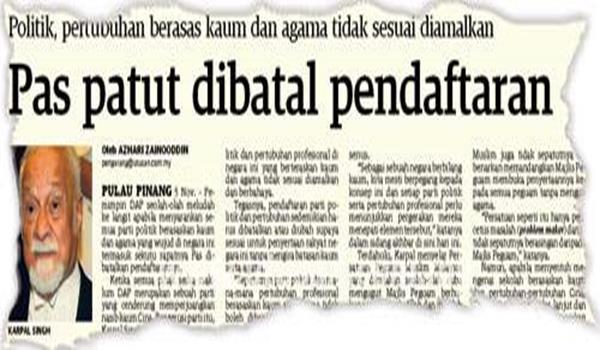 PAS youth is trying to pin down DAP for trying to get PAS dissolved through the suggestion that the government deregister political parties and NGOs that are race and religious base.

The Islamist party youth deputy vice chief Dr Raja Ahmad Iskandar Raja Yaakob had demanded DAP chairman Karpal Singh to retract and apologise for his statements on the subject which Karpal denied having made.


In the midst of the ‘tug-of-war’ between the two parties, a blogger Helen Ang had posted the whole interview which she got and it was clear that Karpal had said the dissolution should include PAS, a religious-based party.

And on Sunday, PAS president Datuk Seri Abdul Hadi Awang, in closing the Selangor PAS convention in Petaling Jaya called on party members not to ‘dance to the music played by oppositions media (Barisan Nasional).’

With the party election scheduled for Friday where the veteran fundamentalists are facing an onslaught from the liberals associated with Parti Keadilan Rakyat (PKR) de facto chief Datuk Seri Anwar Ibrahim, the fundamentalists have been walking a tightrope balancing between holding on to the leadership and continuing the party’s struggle or losing the leadership and allow the party play second fiddle in the political co-operation in Pakatan Rakyat (PR).

The two factions have been locking horns on many things but they always put up a united front so as to convince followers and supporters and the public that the Islamist party is united and have one goal which in reality is the opposite.


The fundamentalists are adamant that the party should go alone with just political co-operation and not a pact where the party has had to compromise on so many principles and placed in an awkward position.

The friction has however surfaced when issues involved got more sensitive where they touched the very principles and pillars of Islam and this has got the two factions can no longer hide their disagreement which then led to ‘media war’.

Besides that issues, the fundamentalists are also getting ‘tired’ of the loose alliance in PR where the party has target become the target of attack whenever the pact face setbacks such as the recent general election where PAS was blamed for the under performance.


And the fundamentalists, under attack in the Friday election, began their defence by highlighting their achievements – Hudud Laws in Kelantan – and a proposal for debate where Hudud laws should be implemented in PR held states.