Hadi, Nik Aziz Are As Good As Assholes! – Anwar Ibrahim 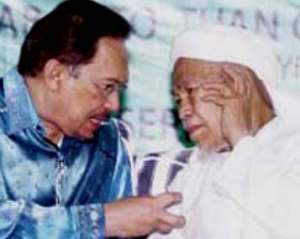 Anwar Ibrahim had finally blurted out loud that he has no respect, no regard whatsoever towards PAS leaders. “Hadi Awang knows nothing!, Nik Aziz just follow along with everything and anything as it goes,” were among Anwar’s words as he spoke to 1,500 PKR supporters during the party’s Chinese New Year dinner on the 10th of February, which was held at Putera Ballroom Kota Kinabalu, Sabah.

The issue that Anwar was referring to was ‘Kalimah Allah’ which, Anwar claims to have more credibility to speak about, compared to PAS’s leaders, including Majlis Syura. The video of his speech is now being passed around and widely shared on blogs, FB and Youtube.

PKR is in desperation to win the hearts of the Sabahans. As at today, the party has no confidence in winning more than 3 seats in Sabah, despite boasting to win at least 13 out of 25 parliamentary seats. With at least RM35 million to be spent on 7 very potential seats, ie. Penampang, Kota Belud, Tuaran, Kota Marudu, Putatan, Libaran and most probably, Tawau, Anwar has to do all he can to turn the table around for PKR, during these crucial hours.

Since the majority of the Sabahans are Christians, the issue of ‘Kalimah Allah’ is taken as the best issue to help Anwar portray his ‘Christian-friendly’ approach. Unfortunately, being ‘Christian-friendly’ may not be enough with PAS ‘churping’ noisily from behind his shoulder.

Therefore, Anwar knew that he needs to discredit PAS, ensuring the Christians in Sabah that PAS carries no weight at all in the Pakatan Rakyat, which is true, in reality. Anwar needs the Sabahans to understand that Nik Aziz and Hadi Awang are mere symbols or almost as good as statues to be worshipped by the lost souls. These statues know nothing and can do nothing about ‘Kalimah Allah’ being used in the Christian’s Bibles when PR finally rules – which is, sadly, true too.

We agree with Anwar that Hadi and Nik Aziz know nothing about Islam or anything at all. However, for Anwar to uphold himself as a better Muslim than the two is simply laughable.

Should Hadi Awang and Nik Aziz know so much about Islam as they claimed, then they wouldn’t have joined politics in the first place – dividing the Muslims and helping the enemies of Islam. And should Anwar be better than these two pathetic old men, then he wouldn’t be screwing around with guys and girls and women and God knows what else. And most importantly, he wouldn’t have referred Mr. Wolfowitz, one of the butchers of the Muslims, as his best buddy.

So between Anwar and the two, they are simply incomparable as they are at their own respective class of the lowest. Only the lowest could work together, despise each other and deny it.

We can’t help but wonder what would Hadi Awang and Nik Aziz’s reactions be, as they watched this video of Anwar’s denouncing them to the lowest possible level that any leaders could be. But we wouldn’t be surprised if the two would deny the truth as they claimed that videos are just steel, which couldn’t be accepted as evidence. They may even say that it wasn’t Anwar in the video for all we know.

We wouldn’t be surprised if their supporters too, would defend Anwar and blame UMNO for what Anwar have said in the video about their Tok and Tuan Guru.

And so, no wonder Anwar didn’t see the need to be careful of what he said about PAS leaders, because he knows very well that it would only provide a vivid proof of the meaning of his words, that is, ‘PAS leaders, are worthless, and if you are in Pakatan Rakyat, you can say anything you want about them, or even Islam, that they claimed to be the champion of and they wouldn’t mind. PAS leaders wouldn’t mind being treated like trash, so call them assholes if you want, but they wouldn’t retaliate, because they know nothing and worth nothing!’

If Anwar ain’t right, why haven’t we heard any ‘noise’ from the Tok Guru and Tuan Guru’s side?