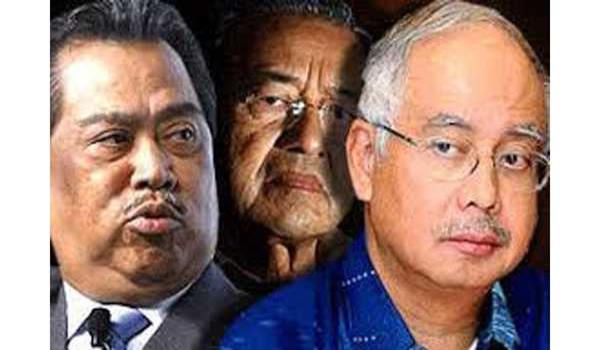 And because Najib refuses to go into conflict with Singapore they say he is ignoring what Dr Mahathir wants and should, therefore, resign. Najib should resign because he refuses to quarrel with Singapore. But that excuse also did not gain traction so they dropped that subject and turned to 1MDB.

Muhyiddin did not explain whether he started speaking out only since he is no longer in the Cabinet or whether he had previously spoken out in the Cabinet meetings and in the Umno Supreme Council meetings. The impression he is giving is that he was never given an opportunity to speak out before this when he used to be in the Cabinet.

Muhyiddin should explain whether he spoke out and what he said during the Cabinet and Umno Supreme Council meetings and what was the response he received. Was he allowed to speak or was he silenced and what replies was he given?

Muhyiddin is suggesting that he is loyal to Umno and is speaking out to save Umno. Has it not occurred to him that by speaking out in this manner he is hurting Umno rather than saving the party? What he is raising has already been replied and explained more than once. What new things are Muhyiddin raising that has not been explained yet?


Muhyiddin is totally ignoring all the explanations given. There is nothing new that Muhyiddin raised that has not been explained. Why does he keep asking the same questions again and again when he does not listen to the replies given? He is creating an impression that he needs to speak out because there are so many unanswered questions. This is not true. The questions have already been answered more than once but Muhyiddin is not listening.

Over the last two years since 2013 Najib has been the target of attacks by those who say that the 2013 election result is his fault and that he is personally responsible for it. At first, soon after the election, they said that he gave in to the Chinese and allowed them too much face but still they did not vote for Barisan Nasional. They said he wasted his time with the Chinese whereas he should have focused on the Malays who are Umno’s support base. In short, he was told he should have ignored the Chinese and just work on the Malays since it is the Malays who keep Umno in power.

This is exactly the same criticism they made against Tunku Abdul Rahman. The late Tunku was accused of being a Chinese lover who ignored the Malays. And this, they said, made the Malays angry with Umno and the Prime Minister. And this same allegation is now being made against Najib.

Where in the world is a leader chosen on this basis? Are we telling the world and Malaysia that it is not the party that chooses its leader but the leader is chosen by just one man? Does what Umno want not matter any more? Does everything depend on the wishes of just one man?

This reminds me of Russia almost 100 years ago when one man, Lenin, decided who should run the country. The party had no say in the matter. And Lenin’s chosen successor was Stalin. And Stalin ruled not only with an iron fist but brought misery, death and destruction to the country. A system of one-man rule and one man deciding who should rule no longer has a place in this modern world. Dr Mahathir has to accept this reality and move on. Umno will decide what Umno wants.

Singapore is our neighbour. In fact, it is more than just our neighbour, it is also our partner in many things, trade being one of them. There is also the relationship between our two countries and the peace and security of the region to be considered. So we cannot force our will on Singapore just like we would not want any of our neighbours forcing its will on Malaysia.

There are those who want Najib to take a confrontational stand with Singapore rather than a diplomatic approach. We need to discuss with our neighbours all issues that may affect this relationship and seek a middle-of-the-road solution. That is how neighbours are supposed to deal with each other.

Singapore is opposed to the demolishing of the Causeway, which we jointly own. But there are those who want to demolish just half the Causeway, our side of the Causeway, and replace it with half a bridge. This is so that we can teach Singapore a lesson and send a message to them that we do not care what they want. Only what we want is what matters. Do we need to trigger a cold war with Singapore when there are other ways to improve the relationship between our two countries?

And because Najib refuses to go into conflict with Singapore they say he is ignoring what Dr Mahathir wants and should, therefore, resign. Najib should resign because he refuses to quarrel with Singapore. But that excuse also did not gain traction so they dropped that subject and turned to 1MDB.


So at first it was the 2013 election result and how Najib bagi muka too much to the Chinese and neglected the Malays. Then it was how hebagi muka too much to Singapore by not building the Crooked Bridge. Finally it was about 1MDB. So when one issue failed they change to another issue and used this issue to say that Najib must go.

In January the government appointed a new President/CEO for 1MDB whose job was to turn around the company and make it more viable. Normally it takes years for a turnaround to succeed. 1MDB, however, was given just one year and in June it presented its plans to the Cabinet in how that would be done within six months or so.

But still the allegations continued. They refused to give 1MDB the six months that it needed. All it needed was six months which is already a great achievement by any standards. But the attacks continued. By then it was clear that the issue is not really about 1MDB but that they were using 1MDB as an excuse to force Najib to resign, just like all those other excuses before that. In fact, they wanted 1MDB to fail and that was why they would not allow 1MDB the six months that it needed.

The bottom line is it is not really about the Chinese support or Singapore or the Crooked Bridge or 1MDB. It is about they want Najib to become a proxy Prime Minister who runs the country the way they want it run. And if Najib does not bow to their demands then they want him out and replaced with someone else who they can control and dictate. Najib refuses to become a lame-duck Prime Minister and this is really what the issue is all about.