Utusan Malaysia today revealed on the logging issue in Kedah which is getting worse. This issue has been revealed by alternative media such as blogs and websites a long time ago, but it was ignored by Kedah state government, or even any PR leaders. As for PR supporters, they think that the expose was just another accusation even though some of the stories had pictures to prove the issue.

That is why, it is not surprising if the stories published by Utusan Malaysia, complete with pictures, would still be perceived as BN’s accusation to tarnish the image of PAS Kedah government and PR as a whole.

Even if anyone accept the news, they would only tackle the matter by saying that the problem was triggered by BN, a standard excuse given by PAS Kedah government to respond towards all the issues in the state.

Being too busy in blaming others, the logging issue in Kedah is not just unsettled, it gets even worse by the day and it might end up being disastrous. This is confirmed by experts through tests and evaluations brought by the Department of Environment. Few of the disasters expected to hit Kedah include mud floodings in huge scales, even bigger than what happened in Sik, Kedah back in 2010, which hit six villages – a news which was never published by Harakah, PAS’s official media.

Besides that, another disaster would be water quality, due to heavy logging activities, mining as well as sand digging, at catchment areas which contaminates water in the dam. As of now, the rate of turbidity at catchment in Kedah is at 8,000 – 18,600 Nephelometrik Turbidity Unit (NTU), way passes the normal rate which is 50 NTU, for catchment areas, and 1,000 NTU for rivers, according to the World Health Organization (WHO).

However, Ustaz Azizan stressed that the issue was triggered by BN government and he does not have any jurisdiction to solve it. The question is, is that true?

His political aide, Sanusi Md. Noor, responded to this matter in his blog around August 2011 by saying,”logging activities was approved during JHB meeting in August 25, 2005 and November 9, 2005, during BN’s era as state government. The cutting down license was the final process in the logging process after the approval was passed. Prior to receiving logging license, the arroved areas should be through the process of bordering, tree tagging, waterways evaluation and other technical aspects. After all of those requirements fulfilled, then the logging license will be released by the forestry department. I have mentioned that the process between the approval and logging would take years. So for this area, it took five years before any trees can be chopped off.”

However, prior to the notice, on January 3, 2010, Harakahdaily reported how Azizan managed to raise income in logging through an open tender system.

According to record, 10 companies received logging license from the government through this ‘open tender system’, but until today, Azizan has never mentioned on how big is the size of the project.

The fact is, the process of rewarding license given by the forestry department as well as the environment department only takes six month. That is why, the response given by Azizan’s aide who said that the process takes five years is surprising. 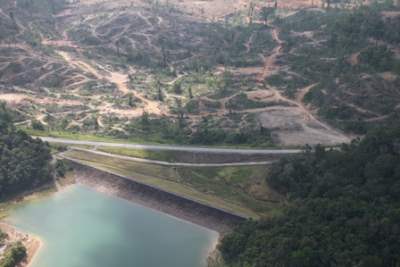 And according to record, since Dato’ Seri Syed Razak and Dato’ Mahadzir Khalid became Kedah CM, no logging license were released at catchment areas. It was rewarded for Rimba Teloi but logging activities were made even before Beris Dam was built and it was a controlled logging. But what is happening to Kedah now is no longer controlled as logs that are still small are being chopped off as well.

Generally, rakyat in Kedah are aware that their CM often ignore issues of the state. Kedah’s audit report is enough to prove that their CM do not know anything where projects worth hundreds of millions are approved without his knowledge.

It is as if in Kedah, everyone, no matter what post they are in, can do things as they wish.

From there, Utusan Malaysia’s report today should be taken seriously by Azizan. He can no longer point fingers to anyone, not to BN or even PAS itself. He should find the solution to his issue.

Moreover, he cannot deny that he did threatened to continue with logging activities around catchment areas if the central government refuses to pay for the annual RM100 million compensation.

Thus, rakyat of Kedah should really know who their leader really is – whether Azizan really do not know anything or he simply ignore things. Rakyat should make the right decision in choosing their state government for the coming GE so that the state would not end up covered in mud.

But before all that, they should find ways to wake Azizan up, so that he would settle state issues instead of working for the coming election.