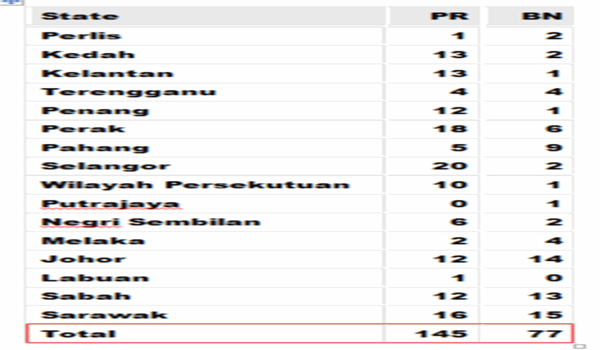 What we have expected, Pakatan Rakyat unable to cooperate well and they would go against one another, has now been proven when they could not solve their seat distribution issue for the coming election.

Perhaps feeling like they are losing the game, PR is now looking for ways to gain back support. One of the ways is to picture as if PR will win the coming GE with ‘flying colors’.

However, realizing that it is now hard for rakyat to believe things that they say, PR has no choice but to use the names of those who are more credible than they are, for example, the police, which they often criticize.

With that, Lim Kit Siang published in his blog, an analysis which was claimed to be taken from Bukit Aman. The analysis somewhat stated that PR is expected to win 145 seats while BN only 77.

Fact is, information from Bukit Aman are confidential and making the police as his enemy, there is no way Kit Siang is given any ‘special treatment’ to receive such information. Besides, internal sources told that the numbers actually goes the other way round.

We know that Lim Kit Siang only wants to ‘fish’ for answers from Bukit Aman or the government, because he is really nervous after looking at the probability of whether PR could win or lose. However, it would not be that easy for Kit Siang because Bukit Aman and the government is not as stupid as DAP which do not even know how to calculate nor type.

Kit Siang can keep on dreaming and keep on giving false hope to PR supporters by publishing this analysis.

In a way, Kit Siang’s actions in publishing this false analysis can be deemed as a statement that he is certain that his political career is coming to an end in Gelang Patah. However, as a politician, he will definitely deny the claim and convince his supporters that he can still win.

That is why, before he goes down, we should thank him as he taught us a great lesson during the May 13 tragedy, where existence of racist people like his is simply too dangerous for the country. Despite of our thank you, we will never apologise to this politician because of what he has done to our country, disunite all race, making this country fragile.

Even when Kit Siang is finally gone, his name will forever remain in history a Malaysia’s ‘Father of Racism’.