Mahfuz Will Lose To Dato’ Sahlan 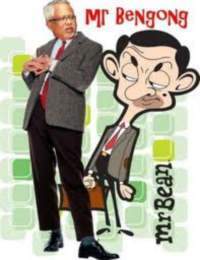 Mahfuz Omar, PAS’s Vice President and Pokok Sena MP are few of the names which is said to be interested for get the post of Kedah’s Chief Minister. But, to get to the objective is going to be very challenging because he is not just facing Dato’ Seri Azizan Razak who gets full support from PAS and the scholars, he would also be facing Mat Sabu and Phahrolrazi, both wishing to get the same post.

Moreover, Mahfuz also realizes that he needs to ensure that PAS would win in Kedah.

For the record, BN had won 14 out of 36 the state’s seat in 2008 which almost all of them were dominated by UMNO while Pakatan with 22 seats, with majority dominated by PAS with 16 seats.

However, the current situation in PAS where the Anwarinas group is facing the rise of the scholar group, this convince us that Anwar needs Mahfuz to lead Kedah to stop this rise within PR’s cabinet which is still yet to be established.

Prior to that, rumors are saying that Mahfuz will be meeting up with Dato’ Sahlan Ismail Nasution, Political Secretary to the Prime Minister, who is also the brother to PKR’s Secretary General, Saifudin Nasution at N9 Bukit Lada at Pokok Sena Parliament. The seat is now held by Ahmad Izzat Shauki (PAS) who got a close win when he went against Datuk Ariffin Man (BN) with 208 majority.

If this happens, we can be almost certain that Mahfuz’s dream to become the next Kedah’s CM would shatter to pieces.

This is because Dato’ Sahlan is a person with high integrity. Previously, he was made as candidate for Kulim-Bandar Bharu to go against his own brother and according to calculation, he could get an easy win based on rakyat’s thoughts on both of them.

Dato’ Sahlan and Mahfuz are two very different people. Mahfuz only has SRP and a bit of experience becoming a porter in airport, how could he convince rakyat that he is better than a person with the experience of being the Prime Minister’s Secretary such as Dato’ Sahlan?

Just like Mahfuz, even Mat Sabu is taking a few methods to influence PAS leaders to support and help him to get to the objective of becoming Kedah’s Chief Minister.

It seems that the challenge which mahfuz has to go through is just as tough as how Pakatan Rakyat would have to go through to get to Putrajaya.