Don’t be fooled by false propaganda about her arrest which are designed to get sympathy for her. 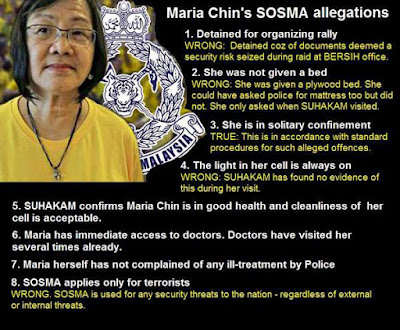 IGP: Maria could have asked for mattress but did not

SEPANG, Nov 23 — The police have denied that Maria Chin Abdullah was treated badly under detention such as being denied a mattress, saying that the Bersih 2.0 chair could have asked for one but refused to do so.

Inspector-General of Police (IGP) Tan Sri Khalid Abu Bakar also said that her solitary confinement should not have been an issue, while insisting that her detention under the Security Offences (Special Measures) Act 2012 (Sosma) is in line with lockup rules and the Prisons Act 1995.

“I deny that we’re treating her badly. Whatever treatment we give her is the same as other detainees,” Khalid told reporters here.

“Allegedly she was not given a mattress. She has to request for it, lah. I did not get any information that she did request it,” he added, saying that Maria had only requested it today after a visit by the Human Rights Commission of Malaysia (Suhakam).

He also explained that solitary confinement is not mandated for Sosma arrests, and had depended on the detention facility available at the moment.

“Why is her solitary confinement being disputed? If we put her with another person she would make noise, if we put her alone, she would get mad,” Khalid said.

Khalid said Maria has access to medical attention, adding that doctors have already visited her three times since the start of her detention.

Suhakam confirmed earlier today that Maria is being held in solitary confinement and denied a bed as she previously alleged, saying it verified this during a visit to the undisclosed location where Maria is being detained for 28 days under the Sosma.

The commission added that while Maria appeared to be in good health and the cleanliness of her cell was acceptable, the conditions were as she had described to her lawyers on Sunday.

Suhakam did not comment on other aspects of Maria’s allegations such as the cell being windowless or that two lights were kept permanently lit.

Maria also did not complain of any ill-treatment by the authorities, but informed Suhakam that she has only been interrogated for three hours since being arrested on Friday.

Police detained Maria on November 18 under Section 124C of the Penal Code that criminalises the attempt to commit activities detrimental to parliamentary democracy, and invoked Sosma for the arrest.

The law permits the police to hold individuals for up to 28 days without trial.

Outrage over Maria’s detention under the Sosma was further exacerbated by her allegation that she was being held in a permanently lit and windowless cell measuring 15×8 feet, conditions that the Malaysian Bar have called “oppressive, inhumane and degrading”.