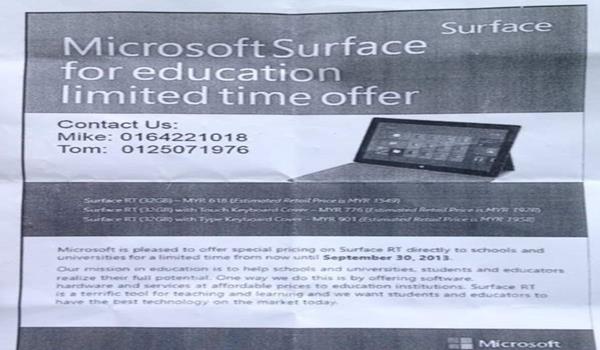 Upon further research, it was found that the program was, in fact, just a sales promotion by SNS Network, a local Microsoft reseller based in the northern side of the Peninsular. A SNS Network sales rep at the promotion booth in USM revealed that the company worked with Microsoft to obtain rebates on the tablet, and have been opening booths in university campuses selling the Surface RT to university as well as secondary school students.

Prior to setting up a promotion booth in USM, the company have also set up booths in other locations as well, such as INTI College, Wawasan Open University, and other locations in Ipoh, KL and Melaka.

The promotion ends September 30, but SNS Network have been invited to extend their promotion and open a booth by the School of Computer Sciences in the university campus. Those who wish to get a Surface RT on the cheap might want to head there next week to check it out. Do bear in mind though that the offer is only limited to university and secondary school students.