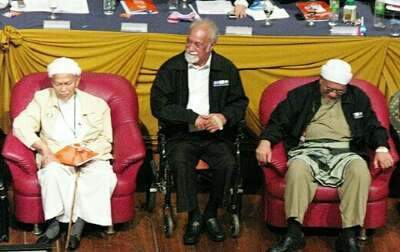 For the first time, Anwarinas in PAS lost. They lost as they fail to influence the Syura Council to take disciplinary actions against Nasharuddin after being ‘rude to DAP’.

We are well aware that Anwarinas in PAS is heading towards success in ‘cleaning up’ the influence of the Scholar group even up until the administration level. But, it seems, with Nasharuddin remaining in PAS, Anwarinas might face serious competition to maintain their power up to the top.

Previously, Anwarinas managed to sack Hassan Ali on the excuse that he broke PR’s foundation. He was sacked for objecting the effort to stop Christians from converting Muslims out of Islam which is led by DAP and heavily criticizing Karpal Singh.

But, even with the same excuse used, there are still no discussion made against Nasharuddin when it is just about the same. Even general knew that even Anwar had moved the effort to convince the Syura Council to fire Nasharuddin.

It seems that Anwar’s plan is ignored this time around when prior to this, everything that is done by PAS would need to go through Anwar first. No one knows why this time PAS ignored Anwar.

Only for criticizing DAP and Karpal, a PAS leader can be sacked but this time around, the same case was simply ignored even though it was what Anwar wanted.

That is the prove that Karpal or DAP is even higher than Anwar.

It is actually very easy to read Anwarinas’s strategy. The post of Vice president which was ‘given’ to Mat Sabu is only temporary to open the door for Husam to be able to get the seat in the 59th Mutamar. Their calculation, Mat Sabu can never compete with Husan even if not many are really following Anwarinas.

Anwarinas had learn from their mistake when they did not compete but instead provided support for Mat Sabu. It was because they were scared that the vote for their group might break like what happened during the previous election.

Who knew what would happen to this strategy. It is not impossible that they might fail.