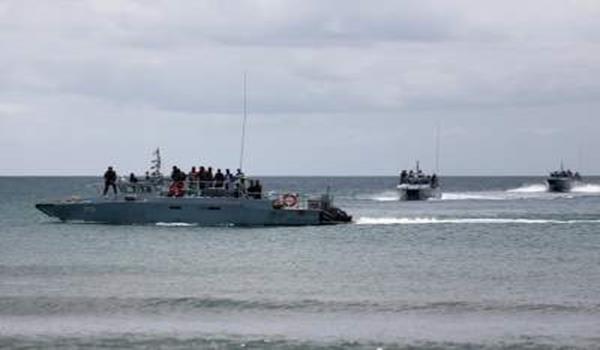 He said the two boats carrying 32 Sulu gunmen, who were fleeing a hunt for them by Malaysian security forces in Sabah, were drifting at sea some seven nautical miles (12.96 kilometers) from Sabah when they were spotted by officers and men of Navy Patrol Ship 38 early Wednesday morning.

But in a report earlier by INQUIRER.net, Lieutenant Commander Gregory Fabic, a Navy spokesman, said 35 people were intercepted by patrol boats BRP Mariano Alvarez and Jose Andrada. The Navy boats intercepted the gunmen at about 6:30 a.m., west of Andulingan, he said.

“Our Navy was able to intercept them and there were four firearms, including a shotgun and M16 rifles, recovered from them,” Ardo told the Philippine Daily Inquirer.

He said one of the boats had 18 passengers, including an unidentified woman, and some of them were wounded. The other boat had 14 passengers.

Ardo said the arrival of armed followers of Kiram in Philippine waters indicated they were in panic as Malaysian state forces intensified the hunt for them in Sabah.

“They are obviously afraid (of Malaysian state forces) and they returned (to the Philippines) to evade arrest there,” Ardo said.

He said most of the intercepted Kiram followers were to be turned over to the police but those injured will be handed over to social welfare officials when they arrive here some time  “before midnight” Wednesday.

The interception of the Sulu gunmen took place as Sabah Police Commissioner Hamza Taib announced on Wednesday that Malaysia’s sea blockade around Sabah was so tight “no Sulu terrorists can escape it.”

Speaking over a Sabah-based shortwave radio, whose broadcast was monitored in Digos City in Davao del Sur, Hamza said Malaysian security forces were making sure that the remaining “terrorists,” led by Kiram’s younger brother Agbimuddin Kiram, will fall as Ops Daulat (sovereignty) was gearing for an end following the clearing of Tanduo in Lahad Datu.

Hamza said only small areas in the “red zones” of Tawau, Semporna and Lahad Datu were being combed for remnants of the Sulu “terrorists.”

But even then, he admitted that residents of Tanduo were still barred from returning home.

Hamza also admitted that Agbimuddin had indeed evaded the operation and was believed still in one of the red zones because he could not escape due to the tightened naval blockade around Sabah.

“We believe he is still in Kampung Tanjung Batu with some of his followers,” he said.

Since the launch of Ops Daulat nine days ago, 56 Sulu gunmen had reportedly been killed but only 44 bodies have been found so far. Of the bodies that were found, only 25 have been taken out of the battle zone because the others were too decomposed to be moved out, Hamza said.

Malaysian Prime Minister Najib Razak told a nationally-broadcast press conference on Wednesday that it was important for Malaysia to beef up its security for the benefit of the its people. The broadcast was also picked up by the Inquirer on shortwave radio in Digos

In addition to the naval blockade, some seven army battalions, backed by air and artillery assets, were now stationed on Sabah with hundreds of members of the Malaysian police.

“The Lahad Datu incident was a wake- up call for the country on the possible external dangers,” Najib said, adding that among the measures being taken these days was the setting up of a 1,400-kilometer special security area from Kudat to Tawau.

He said the intrusion into Sabah by Kiram’s followers showed that Malaysia’s security was vulnerable, but the government was now trying to prevent a recurrence.

Radio 24, a  station operated by state owned news agency  Berita Nasional Malaysia (Bernama), reported Malaysian police deputy chief Khalid Abu Bakar as telling journalists that the government was trying to determine what charges to slap on the Sulu gunmen and their suspected local supporters, who had been arrested in the course of Ops Daulat and the preceding Ops Sulu.

Earlier, Defense Minister Ahmad Zahid Hamidi said those arrested for direct participation in the invasion, numbering 100, will be charged under the Security Offenses (Special Measures) Act of 2012 (Sosma) and the national penal code. The 66 others, who violated restrictions on civilians inside the red zones, might have to be charged with misdemeanor only, he said, if investigation showed they were not actually part of the plot to invade Sabah.

The New Straits Times website reported on Wednesday that among those initially invited to shed light on his suspected role in the Sabah invasion was opposition politician Azmin Ali, deputy president of the Parti Keadilan Rakyat (People’s Justice Party) led by Anwar Ibrahim.

Azmin, Anwar, Jeffrey Kitingan and other opposition leaders were being linked to the Sabah invasion plot. With a report by Frances Mangosing