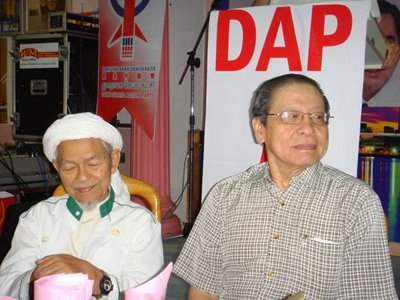 Nik Aziz Nik Mat, the most popular so-called ulamak of an Islamic party and the oldest in the country, has actually shamed Islam and learned Muslims when he termed those who took the BR1M as chickens or fowls.

Truly he reflected himself as a ‘sour politician’ rather than a learned Muslim given his shallow, bias and politically motivated mind in looking at the government’s aid to rakyat to ease their burden.

Nik Aziz, head of the ulamak who was, not not so cannot use the word is, respected even by some Umno grass roots, has now lost all credibility and respect when he shot his mouth without any basis of Islamic considerations.

Islam teaches its followers to appreciate all good things and all good acts by anyone to anyone regardless of race and religion without malaise and biasness, without questioning the ‘nawaitu’ or intentions of the doers.

The ‘nawaitu’ or intentions of the doers should be just leave it to ALLAH the Almighty to judge because HE is the One who will reward or punish – if one does good with good intention or ‘nawaitu’ then ALLAH will reward the doer with good things and if one does good with bad or evil intention, then ALLAH will punish the doer HIS way – ALLAH’s ways are strange.

For Nik Aziz to ridicule and worse still to liken the takes of good deed like BR1M as fowls being fed when needed, obviously he is not sincere and not truly religiously following Islam’s ways and thought.

As Muslims, on the surface value, we should appreciate Prime Minister Najib Tun Razak’s move to extend aid to lessen the rakyat’s burden in facing their daily needs and this act can be considered as Najib indirectly promoting the ‘welfare state’ that PAS is talking about.

What Najib is doing is just not cash aid of RM500 but also other aid such as aid for school going children, college and varsities students and many more, with the objective to lessen burdens.

Najib obviously does not know how many of those would vote for the ruling bBN coalition but he intention is clear…helping out the rakyat as a responsible government.

So Nik Aziz should not, by any account misjudge or passed out remarks that does not reflect the attitude of ‘bersyukur’ or thankful to ALLAH for opening up Najib’s heart and mind to share the country’s wealth directly with the rakyat that lessens their financial burden.

Islam does not want its followers to misjudge other’s ‘nawaitu’ or intentions with malice and biasness because that is ALLAH’s work as HE is The ALL KNOWING WHO KNOWS in and out of a human HE created.

Nik Aziz should as ulamak at the very least extend gratitude or ‘tahnkful to ALLAH’ for Najib’s good acts.

No wonder PAS members who are knowledgeable in Islam accepted the BRIM in good faith, and obviously Nik Aziz is angry because he is a politician, not an ulamak that should be respect.