NURL IZZAH HAS STRAIN RELATIONSHP WITH PAS GRASSROOTS, WHILE DAP IS ENJOYING THE BENEFIT 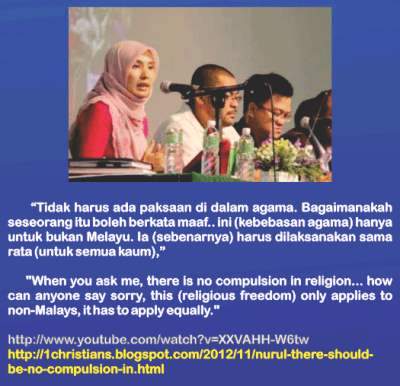 PKR and PAS are in disarray following PKR vice-president Nurul Izzah Anwar’s ;no compulsion on religion’ statements that created a ‘rocky’ situation between members of the two opposition parties.

Despite the quiet front leaders of both parties show in ceramahs and infront of voters, the undercurrent in both the parties is somewhat different and worrying for the leaders.

Nurul Izzah’s statements apparent had touch the central nerve of the Malay hearts who are Muslims by birth and are struggling to strengthen their faiths and while doing so, Nurul Izzah had ‘rock’ their belief in the process.

Like it or not, Malays, how religious they are or how thin their faiths are, will oppose those who attempt to instill ‘freedom of religion’ to their children or to them as they see these as attempts to ‘dismantle the very structure that of the Malay family institution which encompasses Islam as a way of life.’

Call whatever terms one like on Nurul Izzah’s statement – liberalism or pluralism – the kampong Malays may not understand these terms but they understand one thing for certain.

They understand that Nurul Izzah has made a statement that deviated from the faith or ‘aqidah’ of Islam and they will not tolerate such opposition against their belief since birth.

Like it or not, in the quiet and in their silent smiles, these Malays have made up their minds that PKR headed by Anwar Ibrahim and family is a party that promotes ‘kesongsangan’ or deviations from the true path.

And the feelings also are in the hearts and minds of PAS grassroots who are now restless with the leadership silence in the issue, what more to correct the faith of Nurul Izzah.

Thus, Nurul Izzah’s statements, whether she denies it or not, has ‘put a crack’ to the already fragile relationship between members of PKR and PAS.

The silent treatment PAS leadership gave so far indicates their disagreement to Nurul Izzah but the situation, politically that is, may force them to come out with statements ‘not supporting’ her.

With the ground swell and the silent undercurrent opposing her statement, PAS leaders may be forced to review the party’s position in the opposition alliance.

And PKR is in deep trouble as DAP has lost trust in the party and now with PAS silently distancing itself, PKR heydays is considered as gone – and whatever the party’s strategist Rafizi Ramli is doing right now is for the good of DAP and PAS – not for PKR directly or indirect.