Here’s a versatile Windows 8 hybrid device for those always on the move. 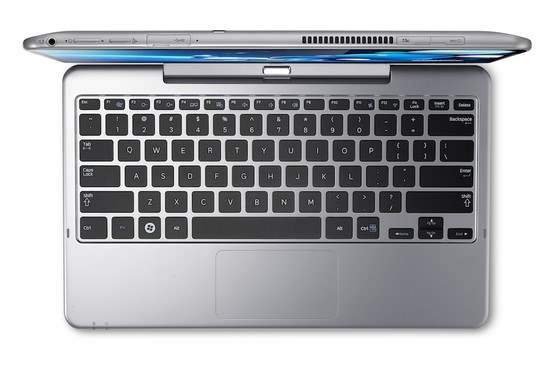 It has a 11.6in full HD display, S Pen stylus and Intel Core i5 processor – all of which makes it one of the highlight in the tech giant’s Windows 8 range of devices.

But when it comes to looks, it is almost identical to its Atom-powered counterpart, the ATIV Smart PC.

The main difference is that the hybrid device is heavier and slightly thicker, and there are vents on the back and on top to accommodate the more powerful Core i5 processor.

The body is mainly made of black plastic – it doesn’t have a premium feel but the plastic helps keep the weight down.

The tablet weighs 884g which is a little on the heavy side but once you add the optional keyboard it goes up to 1.6kg. That’s pretty close to the weight of some notebooks.

The device’s 11.6in screen is impressive thanks to the full HD resolution of 1,920 x 1,080-pixels and good colour saturation. Both text and images look great on it, which makes it ideal for reading e-books and watching movies.

There is no shortage of connectivity options and ports – there’s USB 3.0, microSD and SIM card slots on the top and micro HDMI out on the left along with the volume rocker.

Plus, the optional keyboard dock comes with two USB ports although they are the older 2.0 variety.

It even supports NFC (near-field communication) for easily sharing content with other smartphones and tablets with such capability.

The ATIV also comes with the S-Pen which was made popular by the company’s Galaxy Note devices. It’s slightly shorter and thicker than the Note 2’s but is still comfortable to hold and use.

Powerful processor: This ATIV has a Core chip which makes it more powerful than other Atom-based Windows 8 devices.

We had no problems doodling or writing with it using pre-installed apps such as the S-Note. Of course, it’s a lot faster to type on the keyboard but it’s cool to have a stylus.

As this is a hybrid device, it’s pretty versatile. Once you detach the keyboard, it’s great for surfing the Web while, say, relaxing on a couch.

When you need to do some serious work just re-attach the keyboard and you’ll be ­typing away in no time. The docking mechanism is pretty smooth, as there are no connections to fiddle with.

On the inside, the device has an Intel Core i5 1.7GHz ­processor and 4GB RAM – you won’t ­encounter any problems running apps or watching full HD videos.

However, a speedy processor doesn’t do much for 3D games and the Intel HD 4000 graphics chip isn’t the best in the market. It has no problems handling games on the Windows Store but high-end 3D games on Steam will pose a challenge.

The onboard SSD (solid-state storage) is fast and helps speed up the start up time of Windows. You get 128GB of space but as the operating system also resides on it, you only get 108GB of free space to actually store your apps and games. Not to worry though as you can add on additional storage via microSD cards.

Get physical: Why use a virtual keyboard when you can have a real one.

For snapping photos, the device has a 5-megapixel camera on the back. There’s ­nothing to shout about the image quality but the ­camera is handy for casual shots. The same can be said about the video recording quality.

When it comes to battery life, the device lasted a good five to six hours of continuous use with WiFi on. That’s pretty standard for an Intel Core device but not as good as the power-efficient Atom-based ones but that’s only to be expected.

Still, you can get a lot done in five to six hours.

Best of both worlds?

We had the Smart PC while on an overseas assignment and it was a great device for both work and play. The five-hour battery life, while not the longest, allowed us to complete our work which was made easier by the keyboard. We even had enough battery juice to doodle with the S Pen and play games.

The only real drawback is the price. At RM3,599, it is expensive even for a hybrid machine and almost cost as much as Ultrabooks. If you get the optional keyboard which costs RM419, the entire setup will set you back by RM4,018.

But if you have the budget for it, the ATIV Smart PC Pro will serve you well as both tablet and notebook.

Cons: Pricey; camera could be better; a ­little heavy with keyboard.

Note: The ATIV Smart PC Pro is also available as a WiFi-only model at RM3,599 with the keyboard bundled.