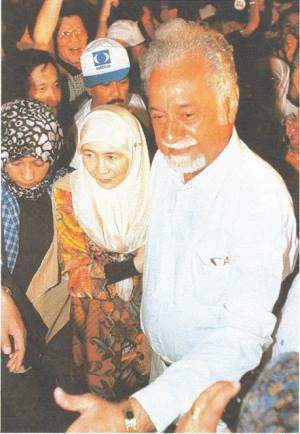 Honestly speaking I think all Malaysians who are voters are actually thinking – whats so great about Parliament being dissolved early or later because at this present moment both sides of the political divide have already been campaigning as though voting is to be held tomorrow!

The political temperature has risen ever since three years back and there is no sign it will go down even after polling because the ‘heat has burnt the iron right down to its core’.

While Prime Minister Najib Tun Razak leads the ruling coalition in defending the and rebutting the opposition pact’s onslaught which the latter has conducted since immediately after the 2008 general election, the pact led by Anwar Ibrahim has been hammering into the minds of Malaysians the purported wrong doings and scandals and what nots done by leaders of the ruling party.

However, since Najib began going down to the streets and talking to ordinary Malaysians, the tide or political climate seems to change and at the present situation, Anwar and his pact are facing problems to convince or influence the ‘thinking’ voters.

Thinking voters, who are matured and wise enough to analyse the promises and pledges and the reality that are served, they have now decided which party to vote and the proof can be seen with members and supporters of the pact abandoning their ‘loyalty’ in droves.

In desperation, Anwar and the pact raised racial and religious issues that further angered the multi-racial and multi-religious Malaysians that see DAP and PAS facing internal conflicts among their members.

Before the issues can subside, the Lahad Datu incursion further put a slap to the pact’s position as Armed Forces and police personnel clearly lost trust in the pact and returned to the ruling coalition.

This is the scenario at present – opposition pact is grappling at anything to stop the erosion of support and influence while Najib and BN are getting back the trust from the people.

And whether the Parliament is dissolved anytime now or later, the scenario is clear – BN is still the favourite – no matter what the pact leaders said.

It does not work anymore because voters see through the bluff – voters are no longer having the 2008 ‘anger and emotions’ because they already see the happenings in states ruled by the opposition pact and they also see the truth from lies that have been pumped to them all this while.

In short, voters are wiser and smarter now and this puts the pact in a desperate position where they now resort to political gangsterism