PAS BOOST EGO BY HAVING TAMRIN IN 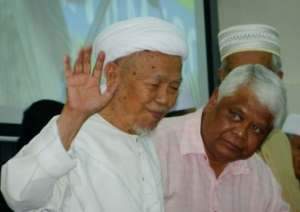 PAS will be accepting Umno veteran Tamrin Ghafar tonight as a member, a party member who has been containing his disgruntlement against the leadersgip for quite a long time.

A son of former Umno stalwart and former Deputy president and Deputy Prime Minister, Tamrin has been having has been contemplating of leaving the party some three years ago but he preferred the party to expel him.

He has acquainted himself well with PAS for quite sometime and it is no surprise he joins the party as he has been identified to contest in the coming general election.

To Umno, losing Tamrin is nothing as he is not popular in his hometown Malacca and his political career is actually no longer relevant to the current situation.

For PAS, roping in Tamrin and several other Umno former leaders is considered a success in manipulating the minds of voters, particularly Malays.

It gives the party the boost in spirit and the ‘lifting of ego’ given the current situation it is in – stuck between the chauvinistic DAP and liberals PKR – and doubts among supporters who are non-members on the party’s struggle.

Shouting to implement Hudud if the party come to power, it still is hazy on the subject matter as it struggles to find the ‘right path to Heaven’ through politics.

The party lacks the expertise and experts to define and refine Hudud and the states it held has not even implement a single Hudud laws.

But Hudud is a selling point as far as the party is concern. Its members – hard to he core – want Islamic laws and an Islamic state to be implemented.

They do not know much about Islam and its true fundamentals but they support PAS because the party is an Islamic political movement which should be supported by any Muslim.

So PAS now can smile wide with Tamrin being a member and the party members will laud Tamrin’s entry as ‘God Gift’ and they will claim Tamrin has changed for the better, Tamrin has been ‘Islamised’.

But the party members forgot that their partners in the opposition – DAP and PKR – ate just riding on them because of the votes they can bring for the coming general election.’

With open opposition to Hudud, PAS members are leaving it to the ‘wisdom’ of their leaders to solve this fundamental political problem so long as they can achieve their aim – to rule from Putrajaya and make Malaysia a theology state.

They have never thought that PKR, with majority members Malays are against Hudud and yet using the party (PAS) to further their own cause – to make Anwar Ibrahim the Prime Minister.

But to them, this is a small matter as they would only want their president Abdul Hadi Awang to be Prime Minister and Anwar can be sidelined once the opposition wins.

They have never question why their party leaders do not ‘ educate the Malays in PKR particularly on Hudud and also the chauvinist Chinese in DAP including Karpal Singh’ so that their struggle would be easier.

Now with Tamrin in the party, they have the feeling that they have been successful in their ‘tarbiyah or educating’ Umno members to accept their struggle.