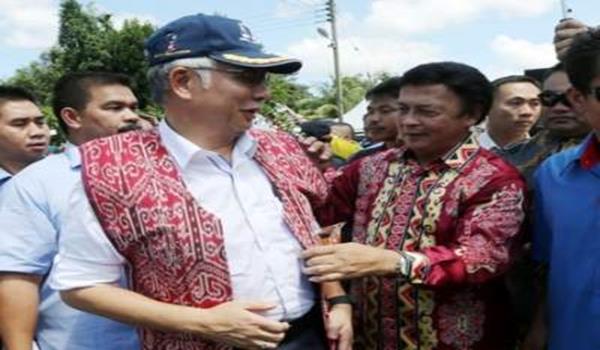 People Need To Be Inclusive In Attitude To Foster Togetherness – @NajibRazak

SELANGAU (Sarawak)  — Prime Minister Datuk Seri Najib Tun Razak urged all Malaysians to choose inclusiveness and not exclusiveness in the spirit of togetherness under the 1Malaysia ambit.

He said through such an approach, the country would remain strong, enabling the Barisan Nasional (BN) to form a functional government with the mandate given by the people in the recent 13th general election.

“If we are inclusive, whether we are the biggest ethnic group or the minority or smallest, and whether we live in the rural areas or interior, we will feel the spirit of togetherness.

“We must feel that the government we have today is the government for all of us and which will continue to struggle for our lot, while we will also get fair and just considerations under the BN government.” Najib said this in his speech at a Ngabang Gawai at the Jangit longhouse in Tamin, about 60km from Sibu.

Najib said the BN government would work hard in continuing the national development agenda to ensure the support of the people, including the Iban community from the longhouses in Sarawak, was not futile.

“Through the people’s mandate, we will fulfil our promises compared to the opposition who have only been making sweet but empty promises….they are just dreaming, and hungry and crazy for power but BN accepts the people’s mandate with full responsibility.

“The trust given is heavy, it’s not a trust that we can cause it to be futile…that is why on Sundays, I still work as prime minister because we are very serious about the mandate given and we do not take the people’s trust lightly.”

Among the proof, he said, was that the federal government would continue with the Sentuhan Rakyat Programme, including providing an additional allocation of RM30 million to continue with the native customary rights land perimeter survey in Sarawak next year.

At the function, Najib also announced a RM2 million allocation to upgrade the Jangit longhouse and Ringkai longhouse, nearby.

Earlier, Najib was welcomed on arrival in full Iban tradition at the Gawai celebration which was attended by about 5,000 people at the Jangit longhouse which has 35 doors (family units).

The elderly, young and even children eagerly reached out to shake hands with the prime minister and his wife.

Entulu in his speech, expressed hope that Najib’s first visit to this longhouse could enliven the 1Malaysia spirit and said the Iban community should emulate the Malay tradition of visiting each other during the Raya celebration.

Meanwhile, Kampung Naslabi Sungai Pakoh village head, Jaibin Dana said he was excited to have met the country’s number one leader in person for the first time.