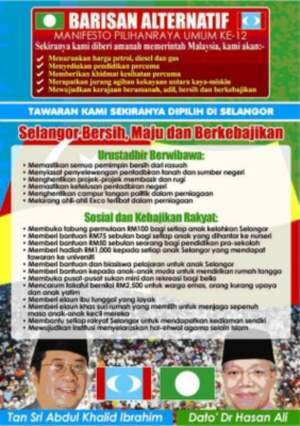 “Manifesto is not a promise” is the ultimate statement made by Selangor Chief Minister, which still haunts rakyat until today. In other words, Khalid stressed that PR;s Manifesto is just a lie.

With that, yesterday, PR announced that the party will launch its latest Manifesto for GE13.

Even though PR’s manifesto do not mean anything because it is not a promise for people, preparing the manifesto, as stated by its Strategic Director, Rafizi Ramli, took 18 months worth of deliberations and discussions, before it was presented twice to the coalition’s presidential council.

He also said that this ‘Manifesto Tipu Rakyat’ brings together all policies based on Pakatan Rakyat’s common policy, the Orange Book and specific programmes which have been earlier announced through PR’s 2012 and 2013 budgets.

In its detail, there was a pledge to ensure ADUN and Exco would remain transparent, establishing a special body to investigate misappropriation of land and its resources on states, and to stop projects that seems wasteful.

However, the thing that happened was land and resources kept on being used inappropriately, MACC’s investigation on corruption case involving PR Exco was politicized which led to the death of a vital witness, and wasteful projects kept on running.

Regarding providing money to rakyat in the other hand, including money for children of Selangor who are in universities, starting fund for Selangor babies, TASKA subsidies, single mothers’ allowance, housewives’ allowance, insurance for OKU, scholarship, free pre-school education and home for every family, does not go anywhere.

However, Selangor government denied that the claim that they have not paid any of the fund promises and according to their checklist, a few matters have been implemented, ot in other words, a few rakyat did get the benefit. They include TASKA subsidy worth RM50-RM100 and starting fund for Selangor-born citizen worth RM100.

We cannot help but to ask, who received those funds? Because, no procedures were followed in terms of announcements, to inform rakyat on ways to claim for these promises. Instead, they simply claim that rakyat have gotten those things.

Also mentioned, assessment tax will be reduced, However, not just that it was not implemented, a few areas in Selangor, the tax was increased.

The same thing goes to the statement saying that they would observe development and preserve the environment. Let’s not talk about development, they cannot even manage the matter of waste management issue in kedah Selangor, Kedah and Kelantan, which never really occurred during BN’s era.

Whatever it is, we should accept that rakyat do not have any rights to question promises that are unfulfilled because “Manifesto Is Not A Form Of Promise” and that it is just a “Lie”.

Thus, rakyat should not hope for anything from PR’s Manifesto Tipu Rakyat that will be launched this February 25, because it is just another paperwork to please rakyat.

Not all Malaysians are as stupid as Anwar Ibrahim who failed to understand simple economics which almost led this country towards bankruptcy when he was the Finance Minister.

Besides, no one need to be smart to understand the statement ‘Manifesto Is Not A Form Of Promise”.