Rakyat Need To Reject Opposition’s Manifesto, It Does Not Promise Anything 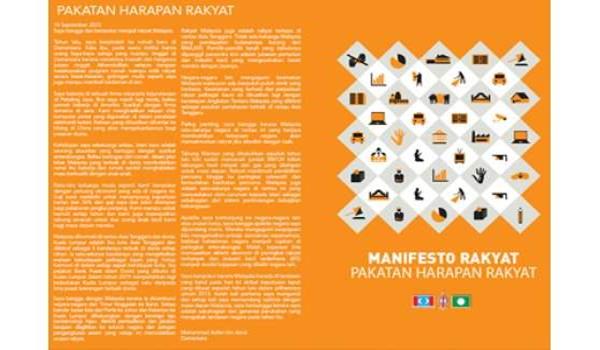 The opposition’s excitement to present their manifesto early, is proven to be a bad idea for them, this is because, after going into details, we can see a lot of issues and it is proven that it was made in a rush.

At first, they took it as a political strategy, to pressure Barisan Nasional (BN), other than to use the issue “BN Copied” approach to go against the government’s credibility, if there are any similarity on the deals which the government might offer soon.

But in the end, the burden which they wanted to put on the government, is actually hitting the opposition, especially Anwar Ibrahim where they feel that their strategy has backfired. It seems like their attempt to attack the government does not even provide any impact to the ruling party, especially at times like this where they are focusing on the intrusion issue in Sabah.

Not just that, government led by Datuk Seri Najib Tun Razak also feel that they need to focus on the responsibilities given to them by rakyat, especially for people of Sabah for now. Since the issue involves the country’s sovereignty, it should be taken seriously.

Going back to the opposition’s manifesto, from studies made on their ‘false promise’, all of those promises would cause the government losing income worth RM393.7 million which involves 207,207 tax payers.

Besides that, their approach in reducing tax and at the same time providing more help, is seen as populist. This is because, all the promises they offer are not the ones that could guarantee rakyat’s well-being, instead, it is just a trick to gain popularity among voters.

This is because all the proposals presented are impossible to be implemented because it could cause cash flow problems for the country. What is worse, their ‘Manifesto Is Not Promise’ could harm the country’s financial status if they are implemented.

This is what happens when everything is done in a rush. After receiving all suggestions from their economic experts, Anwar who is also Selangor’s Economic Advisor once again had no choice but to use the ‘credit card’ approach, to rakyat as an escape.

Sadly, the ‘credit card’ they offer can only work if rakyat registers as members of any parties under the opposition coalition. This is far different than BN as it provides help to all Malaysians regardless of their political ideologies.

The method used by the opposition seem to describe that if Anwar gets to be PM, he would only provide his service to PKR, PAS and DAP party members instead of all Malaysians. Clearly, Anwar and his goon really want to get their ‘revenge’ over all rakyat, except for those members who are registered under opposition coalition.

According to economic experts and analysts, ‘Menifesto Is Not Promise’ does not explain the approach which it would take to replace the RM394 million which is missing.

Conclusion is, as rakyat, we should open our eyes in evaluating all manifesto which will compete, because it is part of our responsibilities as voters.

Only in-depth evaluation will enable us to make the right comparison, all for the sake of our country.

And most importantly, choose manifesto which holds onto the principle of ‘Promises Kept instead of ‘Manifesto Is Not Promise’ which is full of lies, all to please rakyat with false offers.