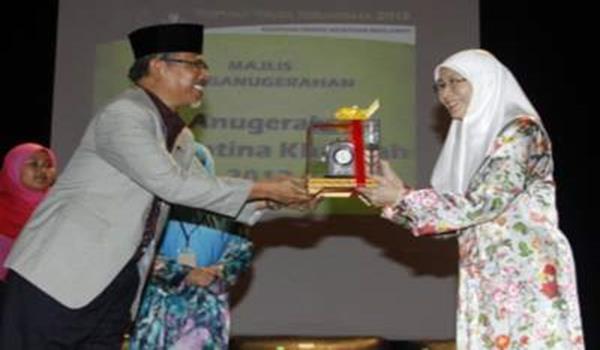 Not enough with PAS insulted Rasululullah SAW’s companions by comparing Lim Guan Eng the kafir, liar and racist leader with Khalifah Umar Al-Aziz, now ABIM instults the wife of Rasulullah SAW by giving an award to Wan Azizah, the wife the famous sodomite in Asia with the ‘Saiyyidatina Khadijah Award’ during its National Helwa Assembly (HKK) on February 13.

The award was given to her by the President of Wadah Pencerdasan Umat Malaysia (Wadah), Dr Siddiq Fadzil to Wan Azizah at Auditorium Jubli Perak, Bangunan Sultan Salahuddin Abdul Aziz Shah (SSAAS) and it was given to her for her ‘courage’ in fighting for justice, truth and Islam, towards a better change.

There is no way that ABIM would not know the history of Saiyidatina Khadijah which is far different than Wan Azizah.

Saiyidatina Khadijah binti Khuwailid RA was a symbol of the First Lady. Saiyiditina Khadijah was a woman with great character and she did not depend on the status of her husband nor family, instead, she stands on her own. She was born in a wealthy family, but she gain her respect as she handles the family business. As a successful businesswoman, Saiyidatina Khadijah was famous among the Quraisy.

Her noble character had given her so much respect which she then known as ath-Thahirah (sacret woman).

Her marriage with Rasulullah SAW was filled with love and respect. Saiyidatina Khadijah was his big motivation and a loyal aide to Rasulullah SAW.

Conclusion is, Saiyidatina Khadijah is the symbol of a true Muslim woman.

Based on these facts, who is Wan Azizah to receive such great award?

Wan Azizah is not a woman who deserves any respect because she decided to eloped with Anwar in Thailand just because their relationship did not receive any blessings from her father. They then got married on February 28, 1980 without any auspicious ceremony or even pictures.

Wan Azizah is just a regular woman, born in Singapore, she was left by her father who was then studying in Singapore. Wan Azizah grew up with two of her uncles on Kedah and Kelantan. It is then said that living that kind of childhood, Azizah did not receive much love.

It is true, Azizah is courageous, but she is courageous in terms of defending a sodomite, she dares to abet to bring down the government led by Muslims to be replaced by a leader who is a pluralist and he would work alongside the enemy just to drive Malaysia towards liberalism. Even their daughter acknowledges pluralism in religion and fights alongside her father with Wan Azizah also by his side, defending them no matter what happens.

Even though defending your husband is something noble, but defending him blindly is stupid, that is not the characteristics of a true Muslim woman, like what as shown by Saiyidatina Khadijah.

Wan Azizah is not a Muslim fighter, instead, she fights for liberalism, pluralism and LGBT, in line with her husband’s fight. That is why, even if she is loyal towards her husband, she should not be given any respect.

Thus, ABIM should withdraw the award from Wan Azizah because she clearly chooses to obey her husband than her religion.

To ABIM, do not insult woman to that level, and do not give such award to a woman who supports the enemy of our religion, race and country. Do not insult Saiyidatina Khadijah by linking her with Wan Azizah.