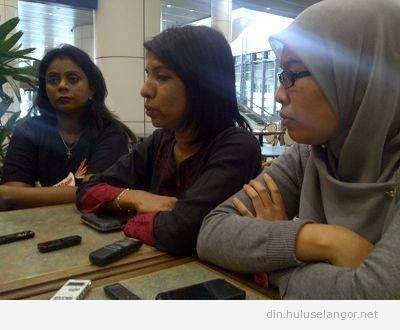 SUARAM, a Non-Governmental Organization (NGO) which was established by the family of former ISA detainees where they were those who had threatened the country’s security, often portray the organization as something that is transparent, independent and that they would fight for human rights and justice. It was established on August 5, 1989 right after Operasi Lalang with its main objective which is to abolish ISA for those who were denied the rights to be tried.

But, as to a rational and smart Malaysian in analyzing information, SUARAM us an organization that fights to ensure that the country would be open to danger by providing rights, time and space for criminals or terrorists to operate.

And as Malaysians, SUARAM is just another one of the opposition’s shadow, or to be more specific, PKR and DAP, in hopes to bring down the government. SUARAM is never transparent, independent and they certainly do not fight for justice or the rights of anyone.

SUARAM is only fighting for the opposition’s political agenda who are objected to a republican nation, liberal mindset and not to just destroy special rights, but also everything that has to do with Islam and the Malay culture.

This can be seen when this NGO somehow went too much in creating the issue as if the issue of the Scorpene submarines were tried in France Court.

it began with SUARAM making complaints in France Court regarding DCN, which is a submarine-maker company of the country, saying that the company had given bribes to another company, Perimekar Sdn Bhd from Malaysia. The complaint was then exaggerated with lies saying that the Prime Minister and his wife were involved in the murder of Altantuya who was charged as the translator during the trading procedure of Scorpene. Altantuya was said to have been killed because she asked for a little part from the bribe. From there, SUARAM also played the story saying that the PM will be be given subpoena by the court of France.

All the ‘details’ about the case were spread by SUARAM through series of press conferences, few of them include those between May 3 and May 26 recently.

However, we need to keep in mind that up until today, the information regarding this case has only been given from SUARAM and their lawyers without any presence of evidence.

Their statements were then taken by bloggers and opposition leaders as concrete evidence, as if it was already decided by the judges, which was then ‘fed’ to the minds of Malaysians.

The government had made a smart response by not saying much about this matter. Instead, the PM had gone under oath, in an Islamic manner, denying the charge and he gave an appropriate response in the Dewan Rakyat. The government needs to take a careful measure so that it would not cause any harm to court procedures which is said by the SUARAM, going under progress in France. SUARAM is the only one who cannot wait for the result from the court so that they could spread yet many more statements.

SUARAM’s exuberance in this issue is simply hard to be understood. Considering that they are the opposition and the opposition is SUARAM, so it should be obvious that the General Election is coming soon because they are getting more and more exited lately.

1. Cynthia Gabriel is the Director of SUARAM and appears to be leading the SUARAM Scorpene probe. The Selangor state government, run by Pakatan Rakyat, appointed Gabriel as a municipal councillor in the Petaling Jaya City Council;

3. Sivarasa Rasiah is a PKR Member of Parliament of Subang, Petaling;

6. Tian Chua is the PKR Member of Parliament for Batu;

7. S. Arutchelvan is the Secretary-General of the Parti Sosialis Malaysia, which works closely with PKR;

8. Dr. Nasir Hashim is the President of Parti Sosialis Malaysia, which works in close alliance with the Pakatan Rakyat coalition;

9. Elizabeth Wong is a former Coordinator for SUARAM. She is now a PKR state assembly member in Selangor;

10. Pramesh Chandran works for Malaysiakini and is close friends with Tian Chua. The two were members of the Network of Overseas Students Collective of Australia together with Elizabeth Wong.

The conclusion is, SUARAM do not have evidence in linking the PM in the murder case of Altantuya. SUARAM also do not have the evidence where bribery did occur during the purchase of Scorpene.

But, we have the evidence where SUARAM do not act as an independent body because they are just the shadow of the opposition where they only want to bring down the government. Thus, it is not a surprise that SUARAM would not hesitate to lie, twist or even create stories about the corruption and murder just to fulfil their objective.