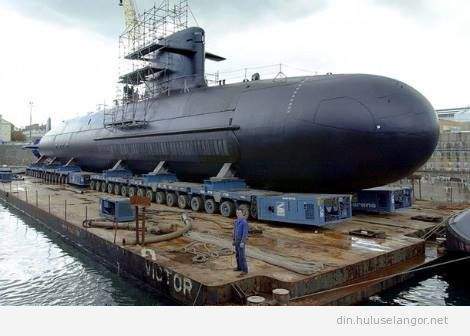 The scorpene issue that was raised by the opposition in ‘the last minute’ right before Tun Abdullah Ahmad Badawi’s resignation was used as their last weapon to ensure that Datoâ€™ Seri Najib would not be taken as the next Prime Minister. After failing to change the fate where Datoâ€™ Seri Najib went up to be the next Prime Minister, this issue was then replayed by the opposition in hopes to shorten his service period.

As how we are all aware of, the opposition had used various disguises to attack BN, few of them include the Bar Council, Suhakam, Himpunan Hijau, Suaram and many others, with the objective of bringing down the government.

In the case of scorpene, they had used Suaram to launch an early attack on their behalf. In the beginning, Suaram filed a complain report on DCNS, a company that builds and sells submarines to third world countries including Malaysia in France court because they ‘suspected’ that there was curruption involved during the purchasing process of the submarine. The issue was said to have its connections with the murder of Altantuya Sharibuu, a Mongolian model who was later connected to a scandal with the Prime Minister.

Suaram’s Coordinator, Cynthia Gabrie was reported to have said,”this case is specific to a commission in value of 114 million Euro that was given to a company, Perimekar.â€

Like what was mentioned earlier, we are not certain that Suaram was acting for the opposition where they want to bring Datoâ€™ Seri Najib down in any way possible.

But, what was done by them this time around is just too much where they accused the Prime Minister for being involved in a murder and they discussed the topic of the country’s defense cost to the world.

The country’s defense cost is something that is confidential where the details should not be discussed in open. Every government around the world should hide a few facts as a security measure for their respected countries. If this matter is discussed in open, it could lead the country to various risks.

The fact that the government did not hide from rakyat was that the cost of the contract for the sub was valued at EURO 1.084 billion.

From that amount, EURO 969.15 was paid to DCNS (France) and NAVANTIA (Spain) as the cost of procurement for two of Scorpene subs, Integrated Logistics Support (ILS) package and trainings for submarine staff.

The rest, EURO 114.96 million were paid in stages for six years to Perimekar Sdn Bhd as coordination and support service costs to the team of Kapal Selam TLDM project in Cherbourg, France and Cartagena, Spain and submarine instructors in Brest, France.

All of those were written in details in the contract that was signed in June 5, 2002.

Refering to the complain that was made by Suaram saying that,”this case is specific to a commission in value of 114 million Euro that was given to a company, Perimekar.â€ From there, the question here is, if EURO 114 million was the commission, did it mean that Perimekar was providing coordination and support service for free? This is because, the transaction document clearly showed that the payment that was involved with Perimekar was only EURO 114.96 million, no more, no less.

In a way, Perimekar was responsible to prepare services as such:

– to prepare management offices and accommodations for TLDM crew ship members, 156 crews and 30 base coordinators in France and Spain for the period of 6 years

– Paying daily allowance and submarine crews’ allowance worth of EURO50 daily for everyone for the first three years and EURO60 daily to each crews for the next three years.

– to cover the cost of flights for submarine crews to go back to Malaysia every four months.

– this company is also responsible to ensure the involvements of Malaysian companies in building and assisting companies to join offset programs.

– Assisting main contractor regarding government procedures in implementing the contract.

– Coordinating trainings between crews, contractors and the government.

– Preparing coordination reports and others.

So, we would like to ask once again, if it is true that EURO 114 million was used for commission, how can Perimekar cover all of those service costs?

The fact is, the EURO 114 million was not a commission but it was to pay for the service that was given by Perimekar. There is nothing odd about the payment.

The only weird part was the accusation that was made by Suaram and the opposition.

Their consistency in bringing Datoâ€™ Seri Najib down that they even hired a writer who has a history of mental problems, Raja Petra Kamaruddin (RPK) for them to create stories about the involvement of the Prime Minister in the murder of Altantuya which was said to haev related to the purchase of the sub for the country, had began to raise various questions. From such talks, is it possible that the opposition themselves have anything to do with the murder?

With RPK admitting that he only created stories is enough to prove that other parts in his stories, such as the issue of Scorpene were lies.

That is why we would like to invite France or anyone to make an investigation to reveal the issue of Scorpene. It is not impossible that we might find something bigger than lies that were made by the opposition.