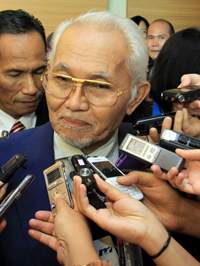 Taib, who was met at his Hari Raya open house at the Borneo Convention Centre Kuching (BCCK) here on Sunday, told reporters that the state had always discussed directly with the federal government issues that needed to be ironed out.

He believed that it was unnecessary to make public his opinion on the oil royalty for Sabah and Sarawak if a direct talk with the prime minister could yield better results.

“That has always been the way of the state’s dealings in its relationship with the federal government,” said Taib who is also Finance Minister and Resource Planning and Environment Minister.

He was responding to the press when asked on reports of several Barisan Nasional (BN) elected representatives recently making public their opinion that it was high time the state and federal governments hold talks on increasing oil royalty for the two East Malaysian states.

Taib said he knew that a certain political leader had been playing up the issue publicly of late but he pointed out that this person was also one of those who did not agree with the request to raise the oil royalty in the past.

“I know that somebody has talk about it but that somebody knew the state’s position before and he himself did not agree with it. Now he has taken the opposite stand, I don’t take him seriously.”

Calls for bigger oil royalty for the state were raised as far back as December 1999 during the State Legislative Assembly sitting.

Former Deputy Chief Minister Datuk Patinggi Tan Sri Dr George Chan in his winding up speech then, said the state would ask for better oil and gas royalty to enable the state to accelerate its development.

The Borneo Post recently reported that state leaders from both side of the political divide struck a common ground in calling for the federal government to review the five per cent oil royalty paid to the state in the past four decades.

Land Development Minister Tan Sri Dr James Masing suggested that the review on oil royalties for Terengganu and Kelantan by a special committee to be set up by the Federal Government should also include Sabah andSarawak as both states were the main contributors to the national petroleum production.

Welfare, Women and Family Development Minister Datuk Fatimah Abdullah opined that since petroleum production had increased due to technological advancement, it was logical that the royalty to the state should be reviewed.