THE MACC HAS DECLARED WAR ON THE ATTORNEY GENERAL 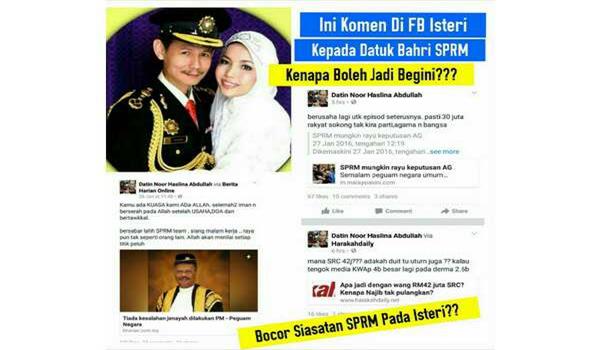 Basically, the week of the 3rd to the 10th of August 2015 tells the whole story (see the news items below). A number of officers within the MACC were identified as working with the opposition and of selling classified documents and information to the opposition, which was then used in the effort to bring down Prime Minister Najib Tun Razak. A more recent and interesting development is regarding the wife of one of the key MACC officers involved in the whole plot, Datin Noor Haslina Abdullah, who appears to also be involved in the MACC investigations and is privy to classified files and documents. She even had the gall to post her legal opinion on her Facebook page.

By law, investigations conducted by the MACC and PDRM are classified and are protected by the Official Secrets Act. But this has not stopped the MACC from selling this information to the opposition. And since December 2014 a lot of classified information and documents have surfaced on opposition websites and news portals.

And now even the wives of the MACC officers have access to this classified information and can talk about it on their Facebook page. The MACC might as well hold its meetings in the stadium and invite the opposition leaders and supporters to attend those public meetings.

After all, the MACC is already giving the opposition an hourly report on what is going on. They hold joint press conference with the opposition leaders. They drafted a charge sheet against the Prime Minister even before the investigation was completed and even before a decision was made. They recommended that the Prime Minister be charged for a crime even before it can be determined that a crime had been committed. When the Attorney General announced that it is his ruling that no crime had been committed they openly defy the Attorney General even though he was within his powers.

Article 145(3) of the Federal Constitution of Malaysia gives power to the Attorney General regarding criminal proceedings. By openly challenging the Attorney General, the MACC is making it appear like he was wrong and that he does not have this power.

The MACC knows that legally they do not have a leg to stand on but what they want to do is to play their game in the court of public opinion. They are trying to make it appear like there is something wrong with the hope that this will work up public sentiments.

I suppose if the MACC can manipulate the system to cover up a RM8 billion crime in MAS, which was in turn to cover up the RM30 billion Forex loss, then the MACC is capable of doing anything under the sun. (The Malaysian Insider, 3 Aug 2015) – Malaysian Anti-Corruption Commission (MACC) director (Special Operations) Datuk Bahri Mohamad Zin today expressed his frustration that police are focussing their attention on the commission for the leak in the investigations into 1Malaysia Development Berhad (1MDB).

Bahri is the sixth MACC official questioned by police to date under Section 124B of the Penal Code for activities detrimental to parliamentary democracy. Over the weekend, police detained Attorney-General’s Chambers officer Jessica Gurmeet Kaur and former anti-graft agency adviser Tan Sri Rashpal Singh for questioning.

Bahri’s division office was raided by the police today as the latter continue to breath down MACC’s neck for alleged leaks in the 1MDB probe, with seven MACC officers having been called in for questioning to date.

(The Malaysian Insider, 7 Aug 2015) – Malaysian Anti-Corruption Commission (MACC) director (special operations) Datuk Bahri Mohamad Zin and MACC director of strategic communications Datuk Rohaizad Yaakob have been transferred to the Prime Minister’s Department with immediate effect. Both are expected to report to the department on Monday.

Bahri has been very vocal in his comments against the police over their actions in their investigation against MACC on the alleged leakage of classified government documents in the agency’s 1Malaysia Development Berhad (1MDB) probe.

(The Malaysian Insider, 8 Aug 2015) – The wife of former anti-graft investigator Datuk Bahri Mohamad Zin, who has now been transferred out of the agency, made a plea to Malaysians on social media to pray for her husband and others who are under police scrutiny over alleged leaks of official information on a probe into 1Malaysia Development Bhd (1MDB).

Datin Noor Haslina Abdullah, who posted on her Facebook page that she still could not believe what had happened to her husband, said she would continue holding special prayers for him and hoped that others would also do the same for Bahri and his team, adding that they had been “persecuted”.

An MACC source told The Star Online that the decision was made after a meeting between the commission and Government chief secretary Tan Sri Ali Hamsa and Public Service’s Department director-general Tan Sri Zabidi Zainal in Putrajaya on Monday morning.