The Stupidity of Liberal Supporters: They say the name of God is not an issue, but willing to go to war to put Allah in the bible. 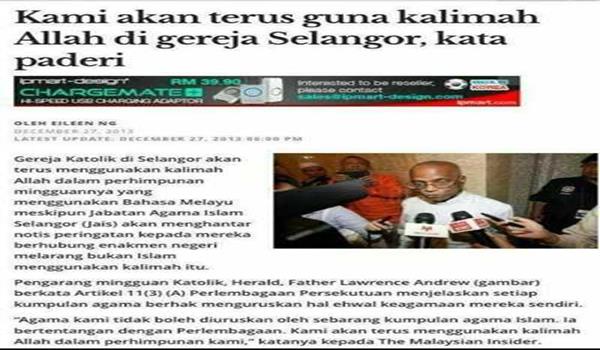 In the midst of trying to persuade the authorities to permit the usage of the word Allah to replace the word for God in the bible, they even try to make a point that all religion prays to the same God. Because of that, they say that any name that refers to any God should not be an issue.

Thus, we are asked ourselves; why not refer the Christian God as Gautama Buddha or Ramayana or Lim Guan Eng? Isn’t the name stated are much more relevant and closer to the people who profess Christianity in Malaysia?

Didn’t they say that the name of God is not an issue?

The argument that all religion refers to the same God means that Christians now believe that God is the same in all religion, including Islam who believed in Allah Subhanahu Wataala.

Allah is not the same entity as the Christian believed in. Allah the All-Mighty, which is worshiped by Muslims “neither begets nor is born”.  (Refer to the Holy Quran 112:3)


Because of that, if Christians says that they pray to the same God, they must acknowledge that Jesus is not the son of God.

It seems that Christian has to make haste as to change their bible that says Jesus was the Son of God, to prove their claim that they pray to the same God as the Muslims.

Logically, how can it be that the same God has different characteristic or contradicting personalities?

With this, we urged all of Christian priest and missionaries in Malaysia to make an official statement denying that Jesus is the same as “Allah” that they worship.

This is the only way to ensure that the usage of the word Allah in the Christian bible so as to avoid any contradiction with the statement that they had made. This will also ensure that the tension amongst Christian and Muslim can be put to an end.