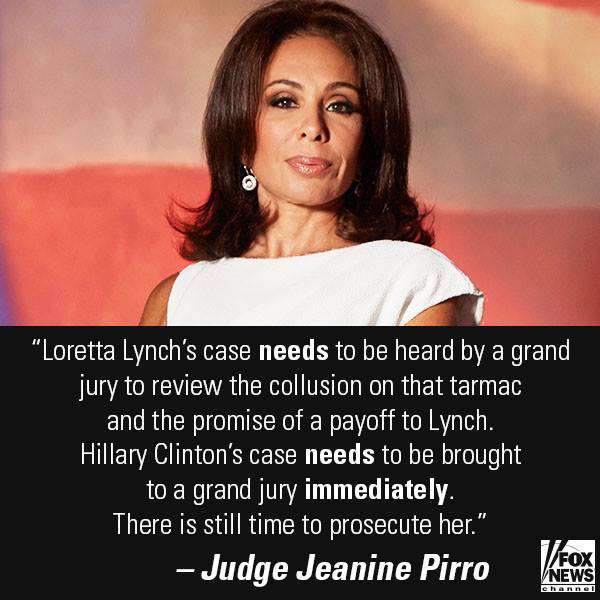 Judge Jeanine Pirro said America is moving away from the principles of justice behind the Declaration of Independence.

“We didn’t know how deep and dirty the collusion really was” between the FBI, the Justice Department, and Hillary Clinton until recently, the judge said on “Justice” Saturday.

The FBI said it had no such documents in response to a Freedom of Information Act request for all documents pertaining to the now infamous tarmac meeting between then-Attorney General Loretta Lynch and Bill Clinton. The Justice Department never responded.

“That was a calculated, knowing, and intentional lie,” Judge Jeanine said.

Later, a federal lawsuit found 413 pages of documents from the FBI and DOJ relating to the tarmac meeting.

Judge Jeanine stated that the FBI and DOJ colluded to give Clinton a free pass as well as other Democrats involved in the Clinton scandals. The Lynch case and Hillary Clinton’s private email server case should be brought to a grand jury, she said.

“I don’t want to hear anymore of this kumbaya,” she said. “While we play by the rules they lie, steal, cheat and continue to get away with it because we let them.”

“So while this country is now virtually paralyzed with fake news stories of collusion … give me one piece of evidence … that Donald Trump’s campaign colluded with the Kremlin.”

“It’s time to take the country back to the original intent of our founders,” she concluded.