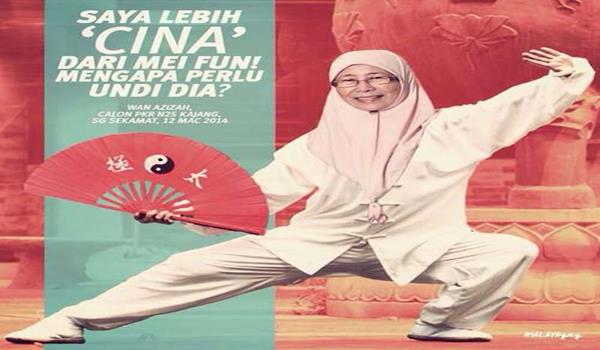 Early voting has begun in the Kajang state seat by-election involving policemen and their families who would be working on polling day this Sunday and thus would not be able to cast their votes.

While the 1,197 of the total 39,278 casted their votes today, candidates on both sides of the political divide are still desperate to outwit each other – one to retain the seat with higher majority while the other to win or at the very least reduce th majority of the opponent.

With three more days to polling which is fixed for Sunday, Parti Keadilan Rakyat (PKR) candidate Wan Azizah Ismail is under tremendous pressure as she walk the thin line between being considered ‘tool of her husband’ and a potential assembly woman who could serve the electorate.

Being the party president who had let go her Permatang Pauh parliament seat in Penang seat for her husband to return to mainstream politics, Wan Azizah is working day and night to ensure not just victory but higher majority in trying to ‘save her husband’s dignity’ as the by-election was forced by her husband for him to helm Selangor.

With the theme ‘From kajang To Putrajaya’, Wan Azizah is left with no choice but to ‘force upon electorates’ that it is the only way for her husband who is the party de facto chief Datuk Seri Anwar Ibrahim to unseat Prime Minister Datuk Seri Najib Tun Razak.

Some of the urban electorate who had voted for the party during the last general election are questrioning the ‘wsidom of Anwar’ forcing the by-election which Anwar named it as the Kajang Move.

This is the setback Wan Azizah is facing as urban electorates who are well acquainted with political maneuverings are not comfortable with Anwar pulling such strategy just to unseat incumbent Mentri Besar Tan Sri Khalid Ibrahim.

Besides considering that as Anwar’s personal interest rather than them as electorate, Wan Azizah is also being handicapped with internal problems where the party deputy president Azmin Ali is busy strategising how to defend himself from the challenge by Khalid for his position.

In fact, Azmin has been busy sending his supporters all over the country campaigning for him to retain his deputy president post leaving the by-election to other party eladers and members.

The party poll will be held on April 26 and the results to be known on first week of May.