We Are Listening Bawani, But Is It Free Education Or Free Publicity? 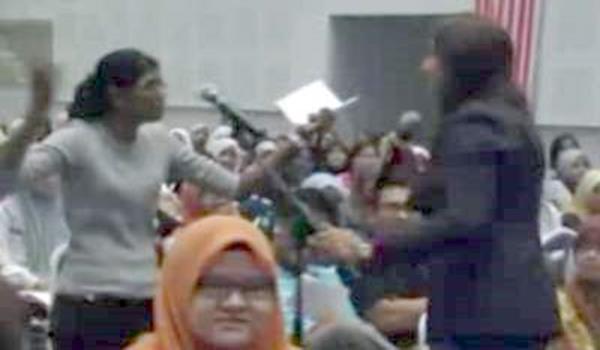 President of Suara Wanita 1Malaysia (SW1M), Sharifah Zohra Jabeen Syed Shah Miskin, didn’t expect that accepting the invitation to be the moderator of the forum in UUM just a couple of days ago would change her life. She was not a panelist for the Women and Politics Forum, and so wasn’t there to answer questions. But somehow, a student Bawani, chose to post a question to her, just as the time was up and refused to ‘stand down’.

Many might not be wrong to suspect that although Sharifah wasn’t expecting it, Bawani might have planned it from the start.

A random opinion would have take it as another case of an ambitious student whose mind is clogged by all the negative perception against the government, taking a chance of glory in the effort to provoke the one wearing a symbol that spells ‘government’, that is ‘1 Malaysia’. Sharifah, was accidentally the obvious one with the symbol.

It is only natural for the youngsters to look up at Bawani’s action as brave. And what do you know, there is already an effort to make her a hero. An Ambiga Junior or may be she is and Ambiga wannabe, I don’t know.

Now, here’s the news for Bawani, that is ‘brave’ and ‘bright’ can be an antonym when it comes to a person’s action. A brave action, is not necessarily, in fact, in most cases, ain’t a bright action.

Bawani’s timing to ask the question is one thing, her tone and mannerism is another thing. Eastern culture just can’t accept such tone, especially towards an elderly, what more in an official function. This package that Bawani had portrayed at that particular moment, seemed to have come from a deep prejudice.

But then, to be fair, Bawani is just a student, a young woman without experience nor maturity, but with things in mind to speak up. And just like many educated young people, she believes that she knows better than everybody else including, or especially, the government and those related to it, in this case, Sharifah.

Sharifah, however was caught unprepared, and unsurprisingly, failed to handle the provoking student well. I’m sure Sharifah would be able to respond better if she was prepared. She didn’t take Bawani seriously because answering question wasn’t the reason she was there. Furthermore, she has a responsibility as a moderator to meet the timeline and the time at that moment, was up.

We understand that for Sharifah, the fact that a student is rudely provoking when the time is already up is just unacceptable. So, she tried to brush it off with silly, irrelevant, un-thought-out answers. Only to find that her answers had given the student a boost of confidence to challenge further. Then, things got a little ugly when temper started to tamper with their rationality.

Talk about how youtube changes people’s life; the next morning, Sharifah woke up as an insensitive, stupid, evil, even racist government agent, while Bawani woke up a hero.

All of the sudden, that little incident in a forum at a university in northern Malaysia, becomes a political issue, complete with racial elements and unfit government agent and a heroic victim.

Now, tell me that Bawani didn’t have anything to do with this and that her choosing the wrong time and the wrong person is totally a naïve co-incidence. And we can see where this is leading, – discredit Sharifah, make Bawani’s race as an Indian a subject, and blame the government should no action is taken against Sharifah. Hopefully, this issue didn’t have to come to Sharifah having forced to pay the price for that silly little incident.

Bawani’s question wasn’t that hard to answer and I’m sure Sharifah would have been able to answer properly in a different situation. With facts brought up by Bawani on free education in other parts of the world, she may think that she would do a better job in the cabinet than the current line-ups. Like I said she is young, immature and naïve, only she doesn’t know it. Ruling the country and providing for free education seems to look as easy as her parents’ providing pocket money to her and her siblings.

From outside campus, it looks like Bawani isn’t properly informed on this issue, just as she isn’t properly informed about good manners. Bawani was comparing Malaysia against Cuba, Argentina, and Brazil in terms of free education for all. But she doesn’t know that free education means higher cost for other things. In order to provide free education, Argentina and Cuba remains a poor country. They can’t use the money to generate income for other causes of development. And giving free education doesn’t mean that the country is clear of any problems. Take Argentina, for example, because the country is poor, corruption is high which led to imbalance in education opportunities where the ratio of rich over poor groups getting the chance for tertiary education is 9:1.

And there is only 10% of Sri Lankans that may get the chance for higher education, the rest can only go as far as secondary education. Brazil gives free education and in return the Brazilians suffer high taxes. Let’s not feed Bawani with easy information but let her put some effort to get the facts about Brazil’s taxes herself so that she may learn something.

Rich countries almost never provide free education, and if they do, for example Denmark, the Danish too have to pay the price through high taxes. Turkey and Malaysia is basically the same, the education is only free up till the secondary level.

Finland’s income tax is as high as 50% compared to Malaysia 26% and Malaysians enjoy high education subsidies whereby the students only have pay about 5% for it, still many of us complain. And Finland’s students is a quarter over Malaysia, in numbers.

Therefore, Bawani, I suggest you write a thesis on this and share with us your brilliant idea on how to provide free education without increasing tax and keep the inflation rate steady. Should you are able to come out with a good solution, we will demand the government to put you on the cabinet. Only then, you are qualified to be treated as a hero.