Who Has Been Funding Bala For The Past 5 Years? 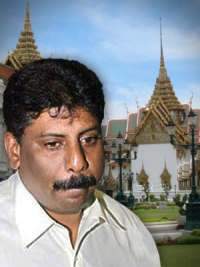 After about 5 years private investigator, Balasubramaniam Perumal (Bala) went to hiding in India, last Sunday, February 24, he came back to KLIA, welcomed by about 50 PKR supporters.

The welcoming ceremony confirmed that the party does have its involvement in running an evil plot to manipulate the murder case of Mongolian model, Altantuya to be linked to Prime Minister, Dato’ Seri Najib Tun Razak.

The first thing Bala did when he got to KLIA was being under oath while holding onto a Bhagavad Gita and said that the first Statutory Declaration (SD) which links Najib in Altantuya;s murder was true, but the SD2 was forced onto him, which proves PKR’ role in this case.

Instead of denying SD2, wouldn’t it be better for Bala if he simply denies the third SD, he did already make false SDs, why not make up to 10 SDs?

It is interesting to see how Malay Muslims in PKR accept Bala’s action with the Bhagavad Gita, perhaps they are exited to see it considering that even PKR General Leader is not confident over the oath made witnessed by Allah S.W.T.

During an interview with the media in KLIA, Bala had announced his preparedness to help Pakatan Rakyat’s campaign by travelling across the country exposing the truth behind Altantuya’s murder case.

This does not shock people, because everyone knew that Bala’s SD1 had links with PKR main leaders as they hope that manipulations and speculations on Altantuya’s murder case could bring Najib down.

PR’s effort did not give any positive result after Bala denied Najib’s involvement, added with Raja Petra Kamaruddin’s statement saying that he did fabricate Altantuya’s story by manipulating everything, and admitted that PM and his wife did not have anything to do with the case.

Instead, it was exposed that PKR’s General Leader, Anwar Ibrahim’s role, which was involved in an effort trying to convince the murder suspects, Azilah and Sirul to mention Najib’s name in this case.

Any of Bala’s move after this would not help PR in any way because people no longer believe in the credibility of this private investigator hired by Razak Baginda.

People are more interested to know why Bala would steal the RM50,000 given by Razak Baginda which is supposed to be handed to Altantuya, and if Bala did not mean to steal it, people want to know where did the money go?

And most importantly, people want to know who has been funding Bala for the past five years.

Obviously the fund came from PKR leaders, because the party even sponsored Elizabeth Wong’s secret lover, Helmi Malik in Indonesia as part of their efforts to put a stop on their scandal from public eye.

The question here is, who is the leader and where did the money come from?