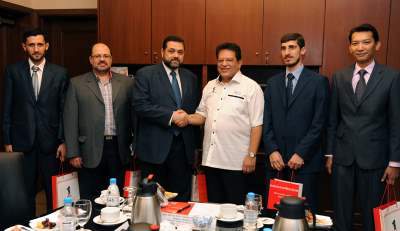 Why Does Hamas Appreciate UMNO, Not PAS? The role for Malaysia as a peace agent has been acknowledged by the world. Malaysia is highly acclaimed for its commitment and consistency in fighting for world peace.

When we talk about Malaysia, then it would automatically brings us to the leadership and the Barisan Nasional government which acts as representative for Malaysians. Thus, in a way, it is not wrong for us to say that the appreciation also goes to Barisan Nasional.

As a party which represents Malay Muslims in Malaysia, UMNO, as one of BN’s components also plays its role in fighting for world peace, especially in the Islamic world. Alhamdulillah, from all of their service, today, not only Malaysia is acknowledged, even UMNO is highly respected for as one of the many who promotes peace in Islamic countries.

This is proven when Hamas’s Chief of Public Relations, Osama Hamdan, one of the panellist in a forum entitled “Conflict and Conciliation in the People’s Politics – Looking Back or Looking Forward”, which was held in conjunction of UMNO’s 2012 General Assembly which begins tomorrow, by expressing his appreciation towards UMNO for providing various donations to Palestinians.


UMNO too, he said, always held on to their stand in supporting Paletinians’ fight even after Hamas took over the country’s administration through Palestine Liberation Organization (PLO).

He also appreciated the leadership of Datuk Seri Najib Tun Razak in handling the issue of Palestine and criticizing Israel’s violence. Few of it, during the 21st ASEAN Summit which was recently held in Phnom Penh, Datuk Seri Najib raised the issue of Palestine in specific, asking the President of the United States, Barrack Obama to take quick actions to stop the conflict in Gaza.

Malaysia’s stand in acknowledging Palestine as a sovereign nation is clear and consistent. Datuk Seri Najib’s statement during OIC Emergency Summit in Mecca in August, he stated this matter in detail. Leaders of UM, BN and Malaysia also hold on the same stand and we have never budged.

At the same time, he would always make sure that UMNO would do their best to help Palestine either if the party acts alone or gets help from other entities. Few of their help include sending food and clothing supplies as well as medicine to reduce Palestinians sufferings.

However, the whole world is aware with Malaysia’s stand on the issue of Palestine-Israel, Palestinians and us, would need to face the risk of change with the stand if Pakatan Rakyat gets to win in the coming General Election.


It is no longer a secret that Pakatan Rakyat’s future Prime Minister, Anwar Ibrahim is few of the signatories for the Annapolis Summit which supports the establishment of a Palestinian state.

Anwar even repeated his stand on this matter back then, on his support to protect Israel’s security. The statement which was published by the Wall Street Journal surprised and caused rage among Muslims around the world. The world’s anger towards the Opposition Leader was expressed by Hamas Prime Minister, Ismail Haniyah to the Chairman of Management Board for Al-Quds Foundation Malaysia, Nasharudin Mat Isa during his visit to Kuwait.

Even though Nasharudin shares the same sentiment as Muslims around the world, but being one of PAS leaders, he failed to explain on either his party’s stand nor PR’s stand in the issue. This is because, stating that PAS does not agree with Anwar in this issue would not be enough, because PAS has agreed that Anwar would become the next Prime Minister if their coalition wins the next GE.

Thus, Anwar’s stand would definitely stay as PR’s stand. Hence, PAS’s stand would not really mean anything. Even today PAS do not really play any vital role in the coalition because the party is basically under Anwar’s control.

Even though PAS accused UMNO for being kafir and murtad and stood proud by saying that only PAS fights for Islam, but it seems like their fight for Islam is not acknowledged by the world. Why? PAS not only acknowledge one of Zionists’ pets as their future Prime Minister, they also had never done anything to Muslims even in this country!

The fact is, PAS is just a party which survives through Zionists’ donations which comes from PKR and they could not even develop any mosques for Muslims. After two decades of ruling Kelantan, PAS can only build a single mosque. PAS even failed in total as they did not get to generate the state’s economy until their state remain undeveloped.

In terms of Islam in the other hand, PAS’s Ulama do not even belong to other Islamic Scholars around the world. This is because they only know how to give ceramah in villages and they would never run any research nor they have contributed any academic materials or even developments to the world of Islam.

Thus, we are not surprised why Hamas appreciates UMNO instead of PAS, in handling the issue of Palestine which is seen to be really close to the hearts of Muslims today