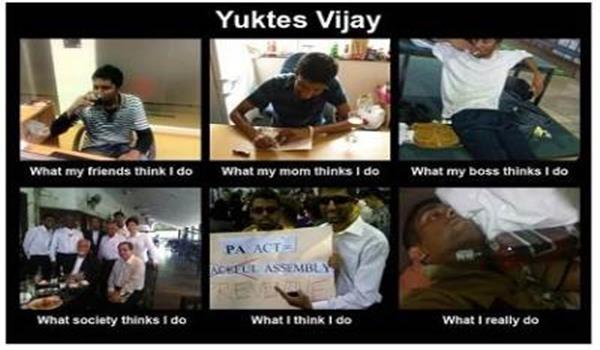 Yuktes Vijay – This letter was sent to online portal , Free Malaysia Today yesterday at 2pm. Sadly this letter is not being published by them. Have read here :

I have been an avid fan of you since I was 12 years old. Your arrest in 1998 was one of the reasons that spurred me to do law and take on the fight for civil rights. However, much has changed since then as you can see. Your role as an Opposition Leader is an important aspect of democracy. We, the rakyat, expect you to be diligent and honest in performing your role. But, sadly that has not been the case. There are reasons for me to feel skeptical about. And, if sadly you become my PM, I want to be at least assured that my country is in safe hands.

A certain Suvrokamal Dutta, a renowned television celebrity, political commentator, and foreign policy and economic expert, wrote an article for MeriNews . The article was subsequently republished in a blog themalaysianrascal.blogspot.com . This are the excerpts from the article itself :

“Sheikh Yusuf Qaradawi a leading IslamicTheologian and visiting his personal house in Doha, Qatarraises many questions. Qaradawi is the unofficial Muslim leader of the Islamicworld and he supports suicide bombings against Israel as well as femalecircumcisions. At Qaradawi’s house Anwar Ibrahim also met Khalid Mashaal as perunofficial reports. Mashaal has taken responsibility for numerous suicidebombings, killing and wounding innocent civilians, including helpless women andchildren. The trip as many have claimed could be a part of damage control onpart of Anwar Ibrahim after his open support to Israel’sdefense of national security claims a comment which was not appreciated in hisown country Malaysia.”

“ …..Anwar Ibrahim has close and personal contactwith the Specially Designated Global Terrorists (SDGT) sources say Anwar hadpersonal contacts with Youssef Al Nada until at least 2011 reports claim Nadapersonally visited Anwar when the latter was on a visit to USA in 2011. Nada anEgyptian banker has been designated by the U.S.,the UN and Switzerland for having financed terrorism through an extensive financial network andproviding support for terrorist-related activities, including those undertakenby Osama bin Laden and Al-Qaida. Nada founded Bank Al Taqwa, the financialinstitution known to have provided cash transfers and investment advice to AlQaida in preparation for 9-1-1. Other close friends of Anwar includes HishamAl-Talib, former director of one of Al Nada’s companies and now with Ibrahim’sIIIT in the US; as well as Dr. Mohammed Manzoor Alam, co-founder with Al Nada of Al Taqwa Bank.

Anwar has also served in the board of Al-Baraka Bank which has a questionable history which the US claims to be one of the main conduits for funding Al Qaida and other terror outfits. Anwar is also one of the founding members of the International Institute for Islamic Thought (IIIT) in the US, which is under-investigation by US Federal law enforcement agencies since the late 90s, for the suspected financing of terrorist organizations such as Al Qaida.”

Referring to the abovementioned excerpts, I am sure you already have your standard template answer of blaming Barisan Nasional for such “allegations”. The problem is Dato Seri, the writer is from India, the story has not been exposed in Utusan nor any UMNO bloggers has played this up. Furthermore, I assume that if PKR can believeDeepak and his slanders, I am entitled to believe this opinion of a writer who has NO links to Barisan Nasional or UMNO. So, tell me Dato Seri, are all the allegations mentioned above true? Did you meet or have any contact with any of theindividuals above? These are serious allegations against an aspiring Prime Minister for a man with such links will surely compromise the security of my country.

You did not sue Datuk SK though he alleged that you had sex with a prostitute. He could not have been anymore defamatory than that. He challenged you to sue him but there has been no action on your part. Say that I assume you did no sue him because it was a waste of time and he has UMNO links, why bother suing Utusan? Selective suing?

My question with regards to this is simple Dato Seri . Are you going to sue this writer? Please clarify the allegations made as a citizen of Malaysia I am worried that my next PM may be a terrorist in disguise.

My next question is Dato Seri, is regarding yourrole in PKR. When the Johor DAP and Johor PKR engaged in war ofwords for seat allocations, Lim Guan Eng and you issued gag orders. Lim GuanEng issued the order as a sec-gen of the party. In what capacity did you issuethe gag order? In true democracy, leaders are elected. As such,the gag order should have been from Wan Azizah. You preach, yell and echodemocracy but you yourself failed to be elected into your own party. What exactly is the problem? You asked Wan Azizah to step down for you to contest in Permatang Pauh. Why don’t you take helm of the party the same way? If you feel that party duties are a burden to you,then why act like a party supremo?

This is hypocrisy at its very best. It is clear that the word “democracy” is apolitical tool in your armory. You do not even come close to practicing what you preach. If you want to debate the Prime Minister, at least be worth his time. I am sure a leader of any country for that matter has no time to engage in a debate with a con artist.

I tried refraining from calling you a chameleon many times but your latest statement in the Sydney Harrold makes me change my stand on this issue. How can you go for a rally, shamelessly cry that Lynas wont be given a licence to operare and then flip flop your stand. Why is it that it is hard for you to have a consistent stand? You are bringing the term “ Do what the Romans do in Rome to a whole new level ”.

You seemingly are an Indian warrior when you are with the Indian community, a Malay imam scholar when you are engaging them and a Chinese economist when discussing with the community. I can state various instances where you have exhibited chameleon like qualities but I do not intend to dedicate much time to it as I feel the rakyat themselves can rewind to themselves to such instances.

I do not care what was given to the Indian community in Buah Pala. What did you promise them? Video evidence suggests that you said that if Pakatan Rakyat wins, you will not evacuate the village. Unless I have been in a coma, I am sure that Pakatan Rakyat rules the Penang Government and Kampung Buah Pala is no more. Even if compensation were given, doesn’t it prove the point that you would do anything to realise your dream in becoming a PM?

Your famed back problem is another one. You seemingly seem to be in a lot of pain during Court trials and I personally can vouch for that. However, when you are in a ceramah, you can hop around and dance around without an ounce of pain. How is that even possible? Dr Hoogland used his magical wand on you?

You are such a hypocrite. How can you demand for freedom of media now when you were the one who actually constructed steps to ensure it is privatised. Remember NST Dato Seri? The time you were taking on Ghafar Baba for the DPM post? I got to remind you all this because apparently you have such a short memory. You did not complain or make efforts for the independence of media back then. You know why? The media was praising you and hailing you. But since now they are crticising you, media freedom is suddenly such a big agenda in you cards. I mean how hypocrite is that. Just like how u spinned the PTPTN abolishment tale though it was your brainchild.

Debate with the PM

You see Dato Seri. The reason I adored you once upon a time is because of your oratory skills. I will be the first to admit that your skills are amazing and engaging. I admire them even to today.

But, for you to call the PM for a debate? It does not make sense. You were in UMNO. You became an UMNO Youth Chief defeating a certain Suhaimi by a mere 10 votes though you were just new to UMNO itself. I don’t remember reading you debating him or using any sort of democratic process to win the election. You won because you were Mahathir’s blue eyed boy. Period.

You want to debate the PM because it is what you are good at. Why don’t you challenge the PM in something which he is good at like fulfilling promises and having various economic reforms. I am even willing to write a petition to the Selangor Government now to get you a pay rise for you to think about economic reforms and not merely ceramahs. I am sure RM 1 is not at all sufficient for me to dedicate my time and effort for a job.

The conclusion here is Dato Seri, I pray no one becomes me. I adored you only to be shattered, disappointed and upset to have known the real you. You are a good politician, no denying that. But to some people like me, you were a hero. And you conveniently crushed it.