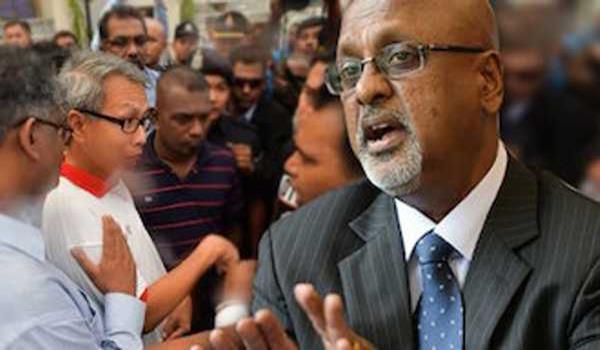 The DAP’s Tony Pua, embroiled in a row with Deepavali bazaar petty traders in Sungai Way, has been advised to stick to national matters such as 1Malaysia Development Bhd and to let the city council deal with the bazaar matter.

Fellow opposition politician Sivarasa Rasiah of PKR accused Pua of having waved the proverbial red flag at an angry bull by getting involved in the issue and making known his personal preference, and of making unfounded allegations about extortion and gangsterism.

Yesterday two PKR divisional leaders lodged police reports against Pua after he had used the words “gangsters” and “disgraceful thugs” against “a Samy” and “a Murali”. He had also alleged that they had heckled him while he spoke to the Tamil press.

The two PKR men were PKR Kelana Jaya secretary S Murali and the deputy division leader K Samynathan. They were accompanied to the police station by G Gunaraj of Selayang division and S Manikavasagam of Kuala Selangor.

Murali and Samynathan said Pua had defamed them.

At issue is the site of the bazaar, which is being moved after 15 years to a location next to the Easwary temple one street away.

Angry scenes erupted at the site on Thursday when Pua, MP for Petaling Jaya Utara, and state assemblyman Lau Weng San, the member for Kampung Tunku, both of the DAP, visited Sungai Way, which lies in their constituencies. Pua conducted a press conference during which traders carried out a noisy protest at being relocated.

Sivarasa, who MP for Subang, and a member of PKR’s central leadership council, questioned the need for Pua and Lau to get involved.

He said a majority of the Petaling Jaya city councillors had already proposed to the mayor that both locations be used this year, with trading at the new site being considered an evaluation or trial run.

Sivarasa said Pua should refrain from making controversial public pronouncements and leave the matter to the city council.

“Many traders are strongly opposed to the move, saying that it jeopardise their earnings,” Sivarasa said.

Sivarasa said a Malaysiakini video of the incident showed some of those present demanding evidence from Pua about extortion and gangsterism, “for which there seemed to be no immediate response”.

Sivarasa said he was not aware of any complaints to the city council or any police reports being made about extortion of bazaar traders since the Pakatan Rakyat took power in Selangor in 2008. Traders present on the day had also denied knowledge about such activities.

“Last Thursday appears to be the first time such allegations are being made in public to justify moving the bazaar,” Sivarasa said.