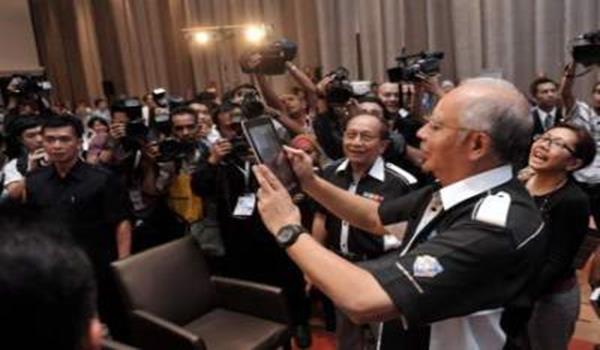 He noted that the ethics and responsibility which came with it (social media) were equally important for society to underscore its importance.

Najib said the coming months would be a fascinating period for people interested in both politics and the internet.

He said he could confidently predict that this would be Malaysia’s first “social media election”.

“We’ve already seen it serve as a catalyst for politicians getting engaged online, and that can only be a good thing.

“Of course, it won’t be the biggest factor at this election, but it is certainly, the tempo of political debate and bringing more voices into it,” he added.

Najib said, in fact, that was one of his ambitions as prime minister that he had a responsibility to think about the whole country, which means making sure that as many people as possible have access to the opportunities that social media brings – “not just those of us in this room.”

He said the government could not afford to let parts of society be left on the wrong side of the “digital divide”, cut off from the most potent force for education and enterprise in the modern world.

“We are working to make sure that doesn’t happen, through initiatives like Digital Malaysia, offering smartphone vouchers to young people and expanding broadband access in rural areas.

“I want all Malaysians to be ready for the fast-approaching future,” he added.

Speaking from the perspective of a national leader, he said the emergence of social media had been a powerful force for openness, and the government had no exception.

The prime minister said, that was why he had endeavoured to communicate on the newest platforms and in the most relevant ways, such as the Budget where he had tried to do things differently by launching an online consultation for which he asked the people to submit their ideas, and vote on other submissions.

“So, for the government, just like for businesses, new technology means a new way of doing things. But the power to reach new audiences also brings new responsibilities; to be more open and more accountable.

“People, especially young ‘digital natives’, who have grown up with the internet, now have higher expectations for openness in all spheres of life,” he said.

That was why, he had asked all Cabinet ministers to use the social media and make it a key expectation for all his party’s candidates.