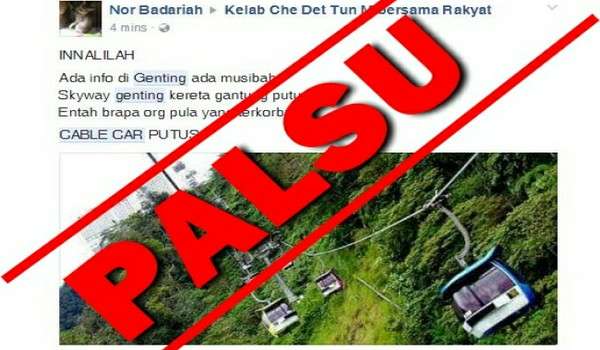 REAL OR FAKE, TRUE OR FALSE?

Take this year-end quiz to see if you are able to tell the difference between fact and fiction.

POST-TRUTH is Oxford Dictionaries’ 2016 international word of the year.

Oxford Dictionaries defines post-truth as: “Relating to or denoting circumstances in which objective facts are less influential in shaping public opinion than appeals to emotion and personal belief.”

“It’s not surprising that our choice reflects a year dominated by highly-charged political and social discourse,” said Casper Grathwohl, president of Oxford Dictionaries.

“Fuelled by the rise of social media as a news source and a growing distrust of facts offered up by the establishment, post-truth as a concept has been finding its linguistic footing for some time.”

In the year of post-truth, Malaysians have seen the prevalence of fake news. To test whether we know what is “True or Not”, here’s a quiz on surreal news in the country.

1) Did an escaped ostrich sprint 35kph on the Federal Highway in Kuala Lumpur?


True: On June 16, six-month-old Chickaboo escaped from the open window of a Toyota Hilux as she was being transported to Ostrich Wonderlands farm in Semenyih.

2) Did two white tigers maul a man in Sunway Lagoon?

3) Was there a mishap involving a snapped cable of a Genting Skyway cable car?

False: On Dec 24, Pahang Civil Defence Force verified the matter with the management of the Genting Highlands Resort and was informed that the cable car service was functioning well.

4) Did a Felda settler from Johor find one of his goats had given birth to a kid that had the features of a human baby?

(No kidding, it is) True: On April 22, Ibrahim Basir of Felda Sungai Mas in Kota Tinggi was shocked to discover the strange-looking kid. A month later, the Veterinary Services Department confirmed that there was no human DNA found in the kid.

5) Did five university students fall into a 24m-deep ravine while taking selfies?

True: On April 21, the Universiti Malaysia Kelantan students were on a hiking trip at Keluang Hill in Kuala Besut when they stopped for some selfies. The hikers slipped and tumbled down. Fortunately, they were not badly hurt.

7) Did a Malaysian VIP fall into a creek while officiating the launch of a backhoe trash compactor invented by the Malaysian Innovation Agency?

False: The 31-second video, which went viral on Facebook and WhatsApp, actually happened to Panaji Mayor Surendra Furtado in Goa, India, in June. The mayor, along with five officials and a journalist, climbed atop a weeding machine designed to only carry two people.

True: On Oct 5, in the biggest ever seizure in its 49-year history, MACC arrested the suspects and remanded them for a week for investigations into alleged kickbacks invol­ving RM3.3bil worth of federal projects.

False: On May 25, the National Registration Department issued a statement, saying the code for Pahang in the identity card remains 06, 32 and 33. The WhatsApp message is believed to be banter among football fans following a Super League match which saw Pahang FC losing 6-0 to arch-rivals Johor Darul Ta’zim on May 21.

10) Did the Government allocate an incentive of RM2,500 for Employees Provident Fund (EPF) contributors aged 55 and above? And should they withdraw the amount from their accounts before today?

False: On Dec 27, EPF dismissed it, saying the fake messages were being spread on messaging apps in the form of an audio clip.


11) Did a poisonous perfume sample cause the death of seven women upon inhalation and exposure in Gleneagles Hospital Kuala Lumpur?

False: The hospital has refuted a message (via email, SMS and WhatsApp) by a person who claimed to be an employee, on behalf of the hospital, in order to warn the public as these seven women were supposedly admitted and treated there. The hoax first surfaced 13 years ago, and it keeps on resurfacing.

12) Is it true that many Malaysians cannot tell the difference between real and fake news, shared mostly on social media and messaging apps?

True: The Malaysian Commu­ni­ca­tions and Multimedia Commis­sion (MCMC) held media literacy classes for about 900,000 people this year showing them examples of fake stories involving MH370, celebrity news and the US presidential election. MCMC was shocked to discover that most could not tell the difference between real or fake stories.

This year has been surreal. Surreal is Merriam-Webster’s word of the year. It means “unbelievable, fantastic”.