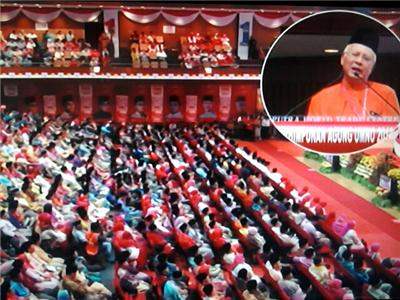 It is clear that the UMNO General Assembly 2012 which was held a few days ago had left huge impact to most opposition leaders which forced them to come up and review those issues.

PKR’s General Leader, Anwar Ibrahim himself seemed unable to hide his worries over the new spirit of UMNO members and its positive impact which has been given to rakyat.

Usually, during or after UMNO organized its assembly in PWTC, opposition leaders would usually provide small opinion or that they would get lower leaders to comment on it.

But this time around, even Anwar gave his comments on the success of the assembly, Anwar commented by saying that the assembly failed to discuss about rakyat’s welfare and it was more focused towards bashing the opposition.

Not just that, Anwar even twisted the speech given by UMNO Women Chief, Datuk Seri Shahrizat Abdul Jalil regarding the May 13, 1969 tragedy.

The speech’s text, at para 52 which was sensationalized by Anwar and his gang which she did not have the time to convey stated;

“Secondly, god forbid, if we are no longer in power, the political stability in this country will be in harm. Malays who are the majority will no longer get any privilege. I am worried that this would bring us to the racial dispute which could bring back the May 13, 1969 tragedy. Do we want the horrible incident to happen in our country to happen again? Obviously not.”

Based on the text above, for us who understand how the tragedy went, we know that it was triggered by DAP supporters’ rudeness when they rallied to celebrate their close victory by bringing brooms to chase away Muslim Malays from Kampung Baru.

During the incident, a few murder took place against Muslim Malays, followed by attacks from Muslim Malays until everything was stabled after the announcement of State Of Emergency.

The 52nd para of the text only expressed concerns, if opposition parties such as DAP and PKR do not have the intention to cause chaos to the country when they win or lose in the GE13, they should not feel like they are guilty.

But looking at their violent campaigns such as Bersih 2.0 and Bersih 3.0 and the Ambang Merdeka rally, do not be shocked by when PR supporters begin to go violent.

Anwar seem to be really worried when all of his evil moves are revealed, when all the things which was stated in the text which he described as UMNO’s attack against him is just rhetoric.

when Anwar had to come forward followed by PAS President, Hadi Awang to comment on the matter, this means that they are aware of the matters which are discussed in UMNO assembly has given a huge impact on the opposition’s violence and weaknesses.