Curry may help in fight against bowel cancer, study finds 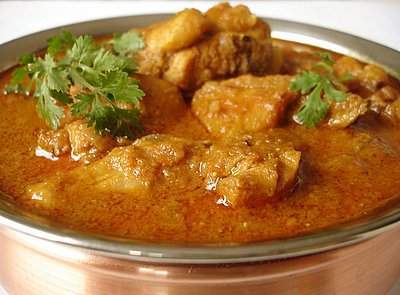 Curry may help to boost the chances of fighting bowel cancer, according to researchers in the UK.

Laboratory tests suggest curcumin, a compound found in the yellow spice turmeric, can increase the effectiveness of chemotherapy.

Curcumin has powerful anti-inflammatory properties and has traditionally been used as an alternative remedy for a host of illnesses.

Now early test results suggest it may be able to reduce the development of bowel cancer.

The studies began after it was noticed that British Asians — referring to Indians and Pakistanis — were significantly less likely to develop the disease than non-Asians.

Now a two-year trial by scientists from Cancer Research UK and the University of Leicester aims to recruit for further tests about 40 patients with bowel cancer that has spread to the liver.

“We are very hopeful. You don’t often see results like the ones we have had in the laboratory,” chief investigator Professor Will Steward said.

“Certainly it is very, very promising and we are cautiously optimistic that we might see an improvement in outcome not just in terms of treating the cancer, making people live longer, giving people a better quality of life but also possibly reducing some of the nasty side-effects of chemotherapy.”

Researchers hope that within three years they will have established once-and-for-all that one of our favorite curry ingredients is helping to prevent bowel cancer.

PETER CAVE: One of the budget sweeteners is $50 million extra for bowel cancer screening.

Well, now it’s been confirmed that eating a spicy curry might actually help in the fight against the disease.

Curcumin, which is present in the spice turmeric, has already proven it can beat cancer cells in the laboratory.

Now the first human trials are to start at a hospital in England.

MATTHEW CARNEY: Professor Will Stewart from the University of Leicester first became aware of the medicinal properties of curry when he found that the Indian and Pakistani communities in his hometown of Leicester had 70 per cent less chance of contracting bowel or colon cancer.

WILL STEWART: We’ve done a lot of work with curcumin and others have in the United States, predominantly, over the last eight years – and we’ve shown that it has well over 100 mechanisms of damaging cancer cells, particularly colon cancer cells. And one of the major mechanisms is affecting the way that they grow blood vessels into themselves.

MATTHEW CARNEY: The active ingredient in the curry is curcumin, found in the spice turmeric. Professor Stewart is leading an international team to test its power on 40 patients with advanced bowel cancer at Leicester General hospital.

They’re giving two capsules of curcumin a day, which is equivalent to eating two large curries.

WILL STEWART: The current trial we’re doing with 40 patients and in sequential patients, we’re increasing the amount of curcumin they get with their chemotherapy to test that it doesn’t cause any side effects. So far it hasn’t. And the aim is to see whether we shrink the cancer in a greater percentage and a greater frequency than has been our experience with chemotherapy alone.

MATTHEW CARNEY: It’s hoped that curcumin will vastly increase the effectiveness of chemotherapy while at the same time reduce adverse side effects. Trials on animals have already showed significant results.

WILL STEWART: Yes we’ve got a lot of information. We’ve got a animal model of developing colon cancer where we reduce the development of colon cancer by around about 60 per cent in those animals, just with curcumin alone.

MATTHEW CARNEY: Bowel cancer is much more prominent in the Western world and Australia has one of the highest rates in the world. The trial could offer hope to 14,000 Australians who are diagnosed with the disease every year.