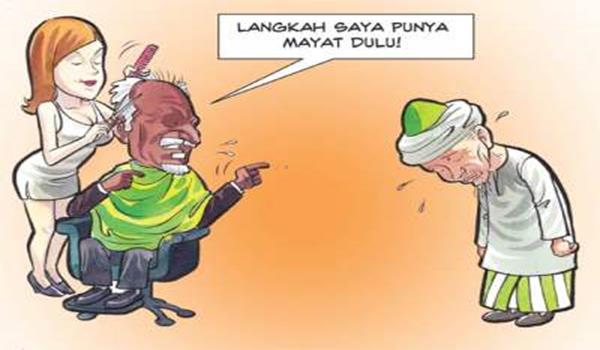 Pakatan Rakyat still could not find any solution towards Kalimah Allah issue. Even the media kept on publishing statements between Syura Council members and Karpal Singh which kept on hitting one another.

Syura Council considered that the issue is finished after they made the decision where Kalimah Allah cannot be used in any Christian Bible and the decision only subjected to PAS members.

However, Karpal denied the claim saying that it is over, as long as Syura Council do not clearly state the approval to allow kalimah Allah to be used in Bibles as well as accepting the fact that Syura Council do not have any rights to voice out their opinion in Pakatan Rakyat, only in PAS.

Looking at this matter in detail, we will find that this issue has been solved a long time ago for Pakatan Rakyat.

This is because Syura Council themselves stressed that the decision is only subjected to PAS members, even though there is no way any PAS members are involved in translating and printing Malay-language Bibles.

At the same time, Syura Council did not exactly stop, and they do not have any rights to stop any DAP members or anyone else to ban anything, like what was stated by Karpal Singh.

This means, both sides have came to an agreement that kalimah Allah can be used in Bibles, except for PAS members.

Thus, the argument between Syura Council and Karpal Singh in the media is just another drama, scripted and filled with subliminal messages. Just like the issue on hudud, this kalimah Allah issue is yet another one of PR’s endless telenovela, even though it is over where PAS had to obey to DAP.

Not that we do not know DAP have to show non-Malays how strong they are, that they are able to control PAS from bringing any Islamic elements into PR. This kalimah Allah issue does not just symbolize PAS’ obedience towards DAP, it is also a strategy which gives advantege towards Christians to convert Muslims.

In the other hand, PAS need to show Muslims that the party is still strong in defending Islam from being attacked by enemies considering that their ‘Islamic’ image is ruined thanks to their defeats: UMNO in Hadi’s Message issue, DAP in Islamic State issue, hudud, gambling, alcohol, massage houses, nightclubs and saloons. Their defeat with PKR include Pluralism, liberalism and supporting Israel.

This kalimah Allah drama is PAS’s final chance to show that they party is still as Islam as they used to be. So, the drama needs to go on at least until the election begin.

The fact is, if it is true that this is not a drama, PAS would have left PR. Just imagine, PAS prefers to let go Nasharuddin Mat Isa than letting go a cooperation which could risk Muslims’ faith and the sanctity of kalimah Allah.