SAME OLD STORY – THE MEDIA IS THE PUNCHING BAG @AzminAli 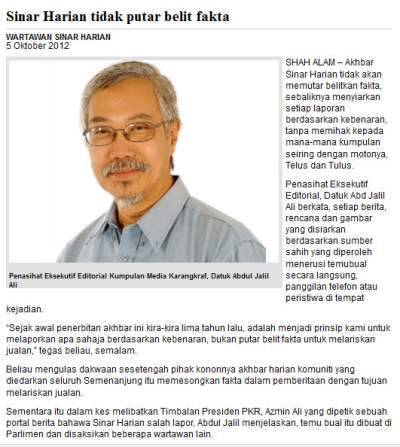 So its back to the old tradition – the media become the punching back – Azmin Ali blamed Sinar Harian for purported ‘misreporting’ him about Selangor MB Khalid Ibrahim and Lim Guan Eng alleged Utusan Malaysia of being ‘mischievious and ultteior motive’ for front-paging PR’s shadow cabinet.

But this time, both of them did not mention of suing – why – because nothing to sue…all are probably true and by suing will only drag the matter further which will, along the way, open up more worms in the can.

They cannot afford to go to court because this time around, the questioning by lawyers may unfold many secrets and unknown motives among themselves which can backfire and affect their ‘marriage of convenience.’

So what they could do now is blame the media with allegations of misreporting and having ulterior motives.

So whats wrong with misreporting? If this is true, then they should show proof so that the media can correct them such as running an apology. So whats so great about that? If not satisfied, then sue.

The reality is Azmin has revealed Anwar Ibrahim’s plan and he has to get out of the situation as pressure now mounting from DAP and PAS leaders for him to reveal more as they continue to see through Anwar’s political ploy.

DAP and PAS leaders know Anwar is not a person to be trusted but they have to allow Anwar some leeway or space as he is the only one that can pull in the crowd, despite being a liar and chameleon.

They know Anwar’s strong points and also weak points and they are now using these for their benefits as long as they know how to ‘bait’ him and the bait is simple – PM post.

And for Guan Eng, he does not care because he has the Chinese in his hands so he can be arrogant and corky, as mentioned by his deputy Mansor Othman.

That is why he can demand and make allegations while at the same time manuevering on how to reduce PKR’s influence in Penang so that DAP can be the dominant.

PKR Malays in Penang are just like ‘pawns’ as they have no mind of their own, preferring to be tools to those who can satisfy them on the daily basis – no long term mind – and that is the reason why they continue to aloow themselves to be tools.

Their leader sitting as Deputy Chief Minister 1 Mansor Othman prefers to be abused by Guan Eng and Anwar rather than stand up with dignity as a man and a leader.

So much about being intellectual because when come to dignity, even a farmer would stand up and fight back than allowing himself being used like a ‘dog on a lease’.

After revealing that PKR has listed 20 Minister from its party if PR leads the country, the party was then criticized by DAP and PAS for not discussing the matter with them first. So, PKR then goes into chaos to cover their leader’s iron-fist attitude, Anwar Ibrahim, including his own wife as the party’s President, […]…