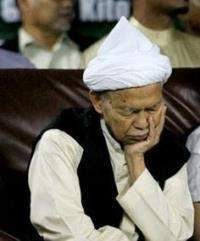 Few of the main responsibilities of a government is to provide basic necessities to rakyat. And as living things, there is nothing more ‘basic’ than water, the main element for us to survive.

Without water, all living things will die. Malaysians are lucky because we are blessed with ‘balanced; weather where it never really goes extreme. We do not have to worry about long droughts or even extreme cold.

Considering this fact, so the failure of certain state government in Malaysia to ensure that rakyat could enjoy this basic necessity, proves that they are really weak.

It is not a coincidence when all states ruled by Pakatan Rakyat faces issues in water supply. Selangor suffers the issue because the state government refuses to accept a solution which was proposed by the central government, though the Langat 2 project.

Kedah suffered increased water tariff since it was taken over by PAS even though few of the promises given by PR before they won the previous election was that they would reduce water tariff. And probably because they still have not managed to gain much profit from the increased tariff, PAS Kedah government now has decided to charge Penang over water supply which Kedah is currently channelling to the state.

So, Penang government went berserk when PAS Kedah mentioned their expected income from the charge, RM20 million, during the budget presentation of the state recently. According to Penang Chief Minister, Lim Guan Eng, PAS Kedah government did not even discuss the matter with them, showing that the actions of Kedah government in putting the number in the budget can be considered as fraud in their presentation, or at least an attempt to con Penang government.

All of these issues has never happened when Barisan Nasional was in power at those states. Only when PR takes over, things went haywire, confused and lost.

The same thing goes to Kelantan after being ruled by PAS for the past 22 years. For 22 years, PAS’s ‘Islamic’ government continues to fail in managing this very basic necessity that rakyat suffers and they had to look for other alternatives not just to look out for water.

If it is just for a single term, perhaps we can accept the excuse given by the state government, no matter what the excuse may be. But after 22 years, more than four terms, still no change, so it is true that PAS Kelantan do not even know how to solve the issue. All they know is only to deny, or blame others for their failure.

Water is not the only basic element in life, it is also an important element in Islam because it symbolizes cleanliness. Islam is a sacred religion, that is why Islam sees cleanliness as a very important matter. Our prayers would not mean a thing if we are not clean.

Perhaps it is a coincidence that all of Pakatan Rakyat’s states suffer water issues. Perhaps it is a sign to Malaysians to see how dirty their coalition really is. It seems that it is not impossible that PR might sink because of this water issue so that we could clean up all of the states which they rule.