Water Vs. Highway, Which One Is More Important? @nikabdulaziz 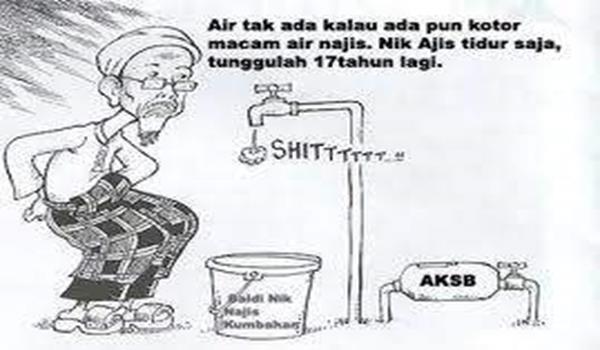 If you are asked to choose between clean water supply and highway project, which one would you choose? Obviously most would choose water instead because it is simply one of the basic necessity of life.

Nevertheless, Kelantan thinks differently because despite of the fact that they suffer water supply issue, even though they have gotten a loan worth RM609 million from Barisan Nasional government, they still insist on proceeding on the highway project, along with collection donation from rakyat.

The rumor on PAS Kelantan wanting to develop their Lebuhraya Rakyat with the cost of RM1.8 billion is beginning to be real since August last year, but until today, nothing is happening. Perhaps it was because there were speculation saying that GE would come by November 2011.

After about a year from there, suddenly another rumor rises, saying that the project would officially start in May 2012.

Once again, probably coincident, the ceremony was held at the time where the speculation on dissolution of parliament and GE was said would be held in June or July 2012.

Since then, the amount of donations for the highway project has gone up to a million Ringgit, god knows when it would take for them to be able to collect up to RM1,800 million.

With the month of June passing with any dissolution of the Parliament, in July, rakyat was shocked by statement made by Husam Musa during DUN Kelantan Meeting, saying that the project was still yet to get any approval from the Exco Council.

Probably to cover their shame, Husam pushes Excos to approve the project as soon as possible while giving the guarantee that the project would be implemented as soon as it is approved.

To add more sugar to the promise, Husam claimed that they already have four machines in the jungle for the purpose of measurements. Who knows what kind of measurement would they do.

We have the rights to be worried, who know if the project would end up like the project in Lembah Sireh, out of the blue, a private company receives a 716.8 acres land worth RM318.29 million without even having to finish up every infrastructure project which was promised.

The highway project was finally approved by July 4, 2012. Based on Husam’s guarantee, the development should have begun at least a week after the approval. Too bad, since the date, news regarding the highway somehow began to simply stop.

After almost three months, during DUN Kelantan Meeting which ended last Wednesday, Husam as the Senior State Exco suddenly told the public that the development of the highway would begin after monsoon either this November or December.

Just so happen that there are speculations saying that the coming GE would be on January 2013, he then decided to give a new guarantee.

Considering that this election highway project often goes on and off just so that it could raise rakyat’s attention, we would like to suggest to Husam to just use the donations which they have raised to provide maintenance service for clean water supply in Kelantan.

Besides, there is no doubt that both water and the highway is important, but everyone knows which one is far more important. Right?